July 09, 2014
There are some things about which a man must speak or risk being tarred with the brush of callous - or complicit - indifference.

Initially this advertised Facebook post (which came up on my feed) seemed reminiscent of the countries that boasted how they'd turned away the (middle class and higher) Jewish escapees from Europe in 1939.

Then I remembered: the boats that have been coming to Australia aren't full of "real refugees". And we know this without giving them due process - without having even heard them. You see, these people are boarding rickety boats from stable, peaceful places like Sri Lanka (or, in the most recent case, from a UN refugee camp in India). Then they're risking life and limb to cross vast oceans in those rickety boats - just to "jump the queue" in immigration.

I mean that's what people naturally do - right? I'm surprised this hasn't happened throughout Australia's history! Why have people suddenly started fleeing certain places to come to the land down under? It must be because of some sort of epiphany about how great it would be to become an illegal immigrant to Australia! It certainly would not be because of some war or persecution! I mean, that's human nature isn't it? Risk life and limb, say goodbye to everything you know and love, all on a chance that some distant, alien land might accept you - after half a decade or more of imprisonment in some equatorial hell-hole! Makes perfect sense.

These refugees are nothing like those Jews who could afford to board the MS St Louis in 1939 in the hope of escaping Germany for a country where they could start again - and maybe work up to a lifestyle comparable to what they had.

No, in this case we're going to take their relative wealth against them.  Because these "illegals" are just looking to jump the queue.

The MS St Louis refugees were, on the other hand, different. We would totally take those folks today.  I mean, who wouldn't want professional, middle class people with a range of qualifications - who are the only people in their society with the means, resourcefulness and tenacity to escape?  These are people naturally selected as the most ideal new citizens!

No - these people coming to Australia aren't in the same league.  They aren't even refugees.  They're "country shoppers", pure and simple. They have to be.  I read it in the political advertisements of my favourite party.  I can feel it in my waters.  I don't need or want to hear their sob stories.  I'm certain that they have only themselves to blame (unlike the MS St Louis refugees).  I'm not wasting any pity on them.  Whatever they get, they deserve.  They are probably mostly Muslim.  Which means they are terrorists - right?  I mean, most terrorists arrive by leaky boats, don't they?  That's standard operating procedure for these guys, I'm sure.  I suspect the "Tamils" are something similar.  Regardless: they dress funny, don't share our values and won't fit in. 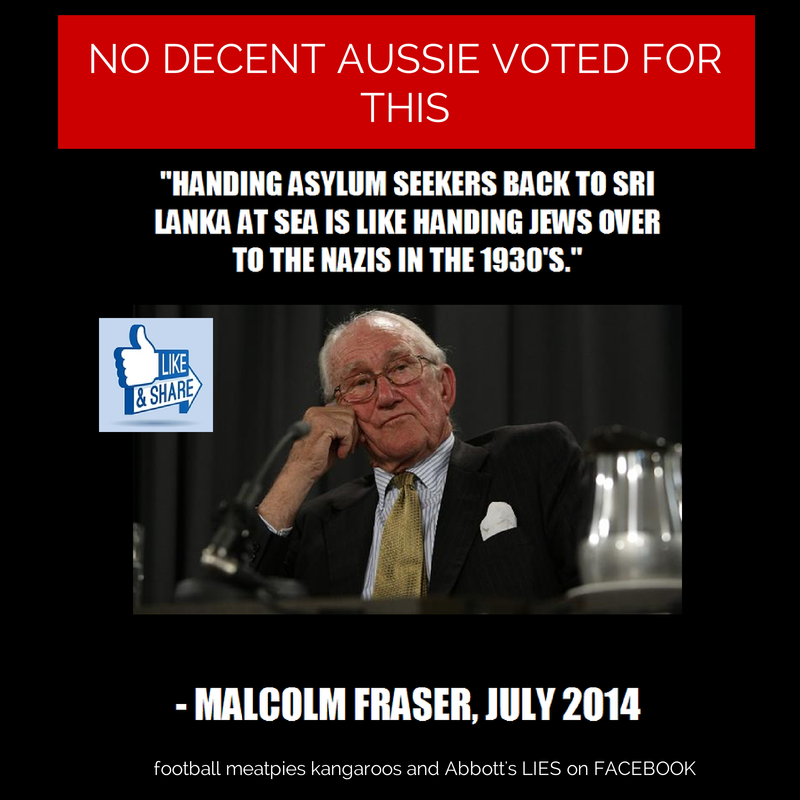 So we should definitely turn them around and send them back to where they came from.  No one is going to imprison or torture them upon their return. Surely they won't! Well, we won't see it, so it won't matter anyway. The fact that Sri Lankan law already states that returned refugees will face  "rigorous imprisonment" can't mean anything - can it?

In any event, even if the High Court keeps ruling against our policies time and time again we can always hide what we're doing.  That way if anything bad happens to these people no one need ever know.  It's for the greater good.  The answer is to make these "illegals" invisible.  We can do this by carefully implementing secrecy measures.  What happens in high seas stays at high seas.  Brilliant!

And there's absolutely no need for Australia to do what every other Western nation is doing - and that is pull its fair share of the load when it comes to the global refugee problem.  We can continue to kid ourselves that the problem is a local one that will "go away" if we turn a collective blind eye.  Yes, we can avoid what no one else in the first world is avoiding: sharing in a far greater per capita influx of refugees.  Yes, we can just "deter" desperate people by being cruel to them.  The tyranny of distance will take care of the rest.

Maybe we'll "make up" for our cruelty to desperate people (including those returned to "rigorous imprisonment") by taking in more people from UN camps. Maybe we won't.  That sort of talk doesn't win elections.  The main thing is to keep talking about "stopping the boats".  Because this does win elections!  Besides: boats are so much easier to talk about.  It gets uncomfortable when we have to talk about fellow human beings.

What have we come to? Where did our humanity go? Will our children's children look upon us as we do those who turned away the passengers of the MS St Louis in 1939/40? I have no doubt they will. I never expected Australia in 2014 to be putting itself this far on the wrong side of history.*

*If you want all your concerns about boat people allayed - or all your arguments for mistreating boat people debunked - go here.  Let's just say everything you think - and worry about - might be completely wrong when you look at the real statistics.  People become refugees because they are fleeing something - not because it's convenient.  Or do you imagine that the entire population of PNG and Indonesia hasn't yet got on a boat to this country simply because it hasn't occurred to them?