Showing posts from July, 2016
Show all

"We can't take them all": defending our refugee policy 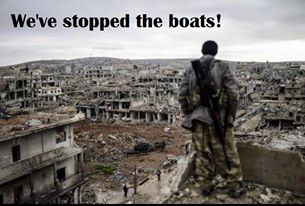 The world's refugee crisis has resulted in some 60 million displaced people  mostly due to conflict - in particular in Syria but also in Afghanistan, Iraq, Kosovo, Albania, Sub-Saharan Africa, Iran and Ukraine.  The Western world has become the destination for many of these refugees, fuelling a sense of panic, resistance and hostility towards them in many of its countries. We in Australia are experiencing a small fraction of this crisis, as some of the refugees make their way around the world, enduring perilous voyages across rough seas in rickety boats to reach our shores.  We have responded either by  turning back the boats or imprisoning the refugees  (in deplorable conditions) in offshore detention camps on Manus Island and Nauru, and promising never to allow them the right to settle in Australia ( or New Zealand , for that matter!). We have a government that is campaigning at the very moment on its proud achievement of having " stopped the boats ".  At the same
Post a Comment
Read more
More posts