What do you REALLY want to be? 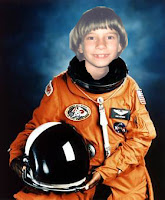 When I was a little tacker I was often given the encouraging advice that "you can be whatever you want to be - if you REALLY want it."

Over the years I have often thought about the apparent absurdity of this advice. Cold hard logic tells us that we can't all be astronauts, world class orchestra conductors, pop stars, actors, champion weightlifters, NBA basketball players etc..

So why do those words of wisdom/encouragement still hang around in my head like a loiterer at a train station?

Is it because I see that, after a fashion, we all become who want to be? An example would be a mate of mine who saw himself as a hard-boiled journalist. You know - the kind you see in noir movies wearing a hat with the peak tilted back, puffing on a rolled up cigarette and hammering away at an old typewriter. Well my friend became that very person before my eyes. Even I live my dream after a fashion - I am a writer in my day job (okay, it's not glamorous writing, but it is writing nonetheless).

No, I think the reason why I keep thinking of those words of wisdom is that I finally understand what they mean. REALLY is being used in the sense of "in reality" or "actually", rather than "greatly" or "hugely".

So, do you ACTUALLY want to be a writer/musician/actor etc.? Or do you just want money, fame or some other trapping that goes with the territory? I know dozens of people who claim to want to be writers, but I just can't see them happily typing away at a computer all day. Writing is a lonely and frustrating business. I also know dozens of people who want to be pop stars. Yet I know for a fact they would never get used to the stresses of performing on stage.

In the end I believe that if you "actually" want something you will achieve it in some form. Witness the busker singing in the mall, the actor still doing commercials after 20 years, the struggling writer, etc. They must REALLY want to do what they do. Who do you REALLY want to be? Maybe you already are...
goal life objective occupation purpose