A treasure chest of memories

Lately I've noticed just how "heavy" my non-martial material is. My fiction deals with themes of guilt, betrayal and the past coming back to haunt you. My other writing is mostly a "rant".

So I thought I'd break with tradition and write something lighter; something that harks back to halcyon days in my childhood, back to a long-lost era of innocence and limitless possibilities.

It was 1972 and I lived with my brother Nenad and my parents in Kavieng - the largest town on the island of New Ireland in the then Australian territory of Papua New Guinea. Kavieng is, I suspect, largely unchanged from those days. It is probably still a "2 street" town with fibreboard demountable homes, one "hotel"/bar, one general store, one Chinese cinema and a 2 room police station. All but the main roads are still almost certainly unsealed, finished instead with a crushed coral called "koronos". The spiky cocos palms still line practically every road, the "public pool" is probably still a mollusc-encrusted enclosure in the sea, not far from the main wharf built by my father during his tenure as the island's principal engineer. 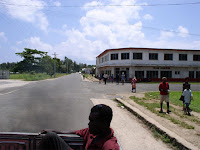 What is different I'm sure is the atmosphere. Back in 1972 the infrastructure, while modest, was almost brand-new due to a massive public works endeavour by the Australian government in advance of PNG's independence planned for 1975. This was a physical embodiment of the zeitgeist. The future seemed rosy. In Australia Whitlam's Labor government with it's mantra of progress and vision had swept into office, riding the wave of the "flower power" revolution of the late '60s. At the same time (and somewhat curiously), PNG was still dominated by a culture of paternalisim. Acting together, these factors created a kind of blind optimism untainted by the economic, social, political and environmental realities confronting the emerging nation of Papua New Guinea - and the world.

It is this kinder, gentler, more optimistic world that I remember so well as a child. My memories of this time are so vivid that they occupy, I'm sure, a disproportionate amount of my memory. The "treasure chest" is one such memory.

Back then the expatriate Australians in New Ireland numbered in the hundreds. I'm sure it is far less now. Many were there as part of the Australian government's infrastructure expansion programme (my father being a case in point). Others were an odd assortment of colonials, drifters, war veterans, sailors, entrepreneurs and adventurers.

One was never too sure who was what. Sometimes it wasn't prudent to ask. "Colonial" expatriate communities all seem to be both dysfunctional and mysterious to some extent.

And so it was that my parents knew an odd, older Australian living some way out of town on a plantation; the kind who wore a "safari shirt" and shorts with long socks over baggy, leathery skin. He might have been one of the war veterans who had stayed on; haunted figures we regarded with a kind of romantic awe. Or he might have been a person who came there for some "economic opportunity". Regardless, he remained in a place which offered little by way of modern convenience or luxury.

One weekend my parents drove out to his plantation and he took us to nearby Panapae Beach where the retreating Japanese had driven their tanks as far as they could into the sea rather than let them be seized by the Allies. To this day the tanks still lie there, disintegrating slowly in the salt and cascading surf.

Afterwards we sat on the veranda in the equatorial heat, the adults chatting and sipping South Pacific Lager from brown "stubbies" while we kids lingered on the edges, as we did at most adult gatherings. I remember how he motioned to Nenad with his beer bottle. "Have look at that son." In one corner of the veranda there was a metal chest or box that was deeply rusted; the kind of rust one only finds near the equator, where not a smidgeon of unaffected metal remains.
"What is it?" he asked as he crouched down to examine it.
"Japanese. Picked it up out of the sea. Some kind of safe from the war. Never could get it open. You kids have a go."

Our boredom had, of course, evaporated. There, before us, lay a box of unlimited potential. Like the bomb craters, the ruined Japanese concrete bunkers that we explored, and the tanks that lay rotting in the surf, this box tapped into our romantic fantasies about the war. What secrets did it hold? Money? Codes, cyphers or other secret documents? All we had to do was get it open.

For the rest of the afternoon my brother and I worked feverishly at the box, trying to pry it open with sticks, hammering at the lock. But the safe held fast its rusted secrets.

When we left that afternoon the ocean breeze was blowing in welcome relief across the tops of the cocos palms. My slightly tipsy parents were no doubt thinking of dinner, showers and bed. My brother and I however were still transfixed by thoughts of what lay in the "treasure chest".

I had little hope we would get another crack at the safe. My brother had, as always, other plans. I'm not sure how soon afterwards (I suspect might even have been the next day) Nenad planned our mission. Assembling the small band of friends who belonged to our club, the BBC (Boys' Bunker Club) he announced a bold initiative. We would cycle the 10 kilometres out of town to the plantation. This time we would go armed with the appropriate tools to open the safe. 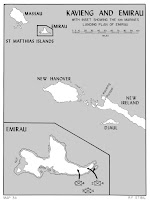 And so, early one morning, Greg Hibbard, Nenad and I jumped onto our bicycles, backpacks filled with rations (cheese sticks, pre-mixed cordial), and headed off. I remember how we stopped off at Andrew Whitehead's house and shouted out for him to join us, whereupon his front screen door burst open and he ran out. His younger brother Brian was crying bitterly because, at 4, he was too young to come on the expedition. His mother held him back and his voice echoed after us as we cycled away. Further down the road an excited Jerry Bagita (the District Commissioner's son) pulled out of his driveway on his cycle and the gang of 5 was complete.

It seemed an impossibly long way; we had previously driven there by car after all. However this merely added to the excitement. Nenad, as our emphatic and visionary leader, seemed to have distances calculated, directions mapped out and eventualities accounted for. Of course, at age 9, he didn't. How and why our respective parents allowed such a venture is hard to fathom in this day and age. But back then the world seemed safer and standards were lower. No one would have blinked to see children as young as 6 cycling off down the Boluminsky Highway that ran the length of New Ireland, koronos crackling under rubber tires.

I no longer recall the journey. There must have been many stops and I estimate that it would have taken at least 2 hours. That we had the patience and energy to undertake such a journey is testament to the single-minded purpose that young boys can have.

When we arrived at the plantation no one was there. I don't remember if we knocked on door or whether we even considered that our presence might be unwelcome. I do remember how we dropped our bicycles onto the dirt and raced onto the veranda to where the chest lay waiting.

We tried to prise it open with a screwdriver, we tried to smash it open with a hammer. Looking back we should have realised that if an adult couldn't open the safe children almost certainly wouldn't have been able to either. 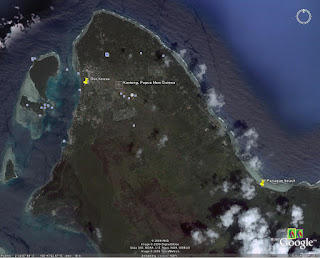 When we had exhausted our attempts at the lock we changed tack. The outer wall of the safe was rusted and thinning. Perhaps we could break a hole into it? Indeed one section on the top already seemed particularly thin and had a small rust opening...

After some feverish smashing and hammering (which involved dropping rocks onto the chest) and some digging with a screwdriver, we did indeed manage to enlarge the jagged hole to the size of a 20 cent coin. We were surprised to find a flat bed of yellow sand lying less than half an inch below the top. The entire chest was evidently full of sand. We wondered how it had managed to get in there. On reflection, it is clear that both sand and water had seeped in through the joints of the casing during its lengthy immersion in the sea. Any documents in there would have long since disintegrated entirely. The frantic Japanese destruction of machinery, equipment and documentation from Panapae airfield had, it seems, been entirely effective.

No amount of hammering or smashing succeeded in enlarging the hole much beyond what we had already achieved. By then it was afternoon and we had exhausted our "rations". Jerry and Andrew had lost interest and were whining and generally making mischief. And so Greg, Nenad and I reluctantly gave up the task and mounted our bicycles for the long ride home.

What became of that safe or the plantation owner I don't know. Perhaps he came home and noted our efforts with a wry chuckle. More likely, he noticed nothing at all. For all our work we'd made little impact on the safe. It held onto its secrets, as I suspect it has and always will.
Andrew Whitehead BBC Gregory Hibbard Jerry Bagita Kavieng Panapae Beach Papua New Guinea