Descartes at the bar

December 17, 2009
It was late and I was tired, standing behind the bar polishing glasses, watching the baggy-eyed patrons leaning on the counter, plumes spiraling up from their glowing cigarette ends, the smell of stale, end-of-the week beer wafting with the smoke like rising damp. 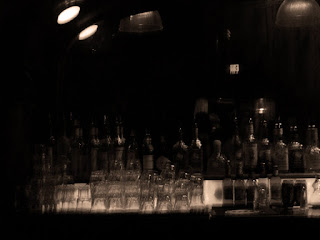 I was going to call for last drinks when this customer walks in; a dark-looking fella, angular, chiseled features partly hidden by his overcoat drawn up at the lapels, a fedora tilted to one side over hooded eyes.

He sidles over to the bar where he pulls up a stool, sits himself down and glances sideways before he looks up at me and speaks in a clipped European accent, a mere hiss above the background hum of the voices: "The name's Descartes."

"Can I get you a drink Mr Descartes?" I ask, but he snorts, leans back on his stool and shakes his head, a sad smile creasing one corner of his mouth.

I reach up to hang one of the wine glasses on the overhead rack and hear myself asking: "Then why are you here sir?" - only when I look back the seat is empty...