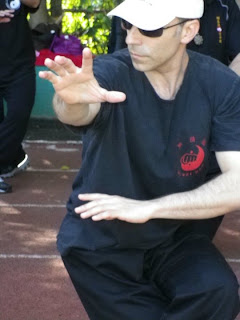 It’s almost midnight and I’m limping in the blue shadows of the monastery grounds finally deserted by the maelstrom of day-time activity. I'm limping because I’m alone and no longer inclined to hide the pain in my lower back – pain that stabs like a thick syringe-needle with every step and the slightest knee lift. It is an injury I sustained in my very first training, and which scans will later reveal to be a prolapsed disc in the lumbar spine. Here’s a tip: don’t travel for almost 36 hours, then attempt long xing (dragon form of xingyi) without a sufficient warm-up.

What am I doing? Oddly enough, I am searching. I’ve arranged with my photographer friend Lucia to take photos at the following dawn for the cover of my book “Essential Jo”. I’ve carted my gi and hakama all the way from Australia for just this purpose. I have come completely prepared – except that I have no jo (4 foot staff). You’d think that a Buddhist monastery built on a bamboo-forested mountain would have such a stick – somewhere. But this doesn’t seem to be the case.

Half an hour before, I’d given up on sleep: the bed that had initially promised so much comfort (but turned out to be not much softer than a kitchen stool) had effectively tossed out my bruised body. And if the bed hadn't done it sooner, my troubled mind, egged on by stabbing pain, would have done it later.

At first I tried to read the magazines I’d purchased at the airport – an unlikely mix of Rolling Stone and New Scientist (“A bit of yin and yang,” I explain to James when I'm passing them on to him later). But half way through the last recorded interview with John Lennon (and a minute into an article about why our white sun can appear “gold”) I gave up, exasperated by the absence of my foolishly-forgotten reading glasses, and turned out the light. 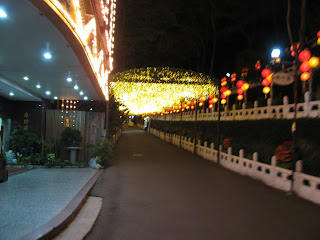 I went to the window to gaze out at the myriad speckled lights that decorated the temple grounds. Something about this glittering star-scape felt irresistibly inviting, drawing me down. And so, only moments later, I found myself dressed and heading out into the fresh night air – away from the stifling confines of four walls and the million thoughts echoing in my head. If I could find a suitable stick, I reasoned, at least one of those thoughts would be silenced. 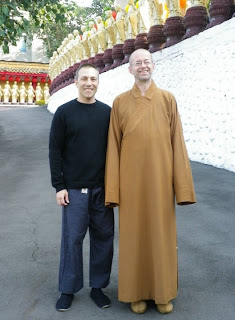 “People think we meditate for happiness,” said our monk-guide Hue Shou. “What nonsense! Who cares about the happiness of monks? We meditate for only two reasons; to learn concentration and to gain insight.” He’d said this the night before as we sat cross-legged in one of the monastery’s many wood-panelled meditation rooms, each in our own alcove propped up against a rolled-up towel. Speaking, somewhat incongruously, via a microphone in the muffled stillness of the chamber, he told us to meditate for no more than 20 minutes as it would then be his bed-time. I lasted about two minutes into the Buddhist breath counting (something I’d first practised on a training camp in Africa 20 years before) until my aching back and growling stomach forced me to tip-toe quietly out of the chamber.

I observe that for someone who doesn’t care about happiness, Hue Shou appears to be remarkably happy. Like the guide from our previous visit, it would not be an exaggeration to say that he (figuratively anyway) radiates happiness. There is something indefinably contented about his person and manner – at the very least something tells me he is not trying to outrun a million thoughts.

I’m passing the monastery’s gymnasium where I know James had kept a whole bunch of rattan sticks. From memory these were all either too long (6 foot) or too short (baton or walking cane), but they are worth checking once again. I recall grabbing one from the pile at our first training and thinking it would do, if only it weren’t so long. Maybe I’ll find a shorter one. 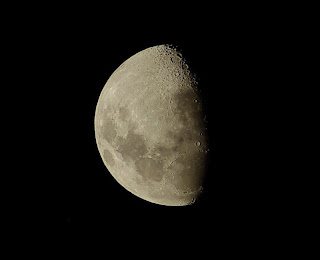 As I approach the gymnasium I catch the unexpected sound of karaoke wafting in the breeze. At first I think the singing is in Chinese, then I realise that it is in fact in English. Through the gymnasium's double doors I can see the remains of some sort of private function. The karaoke performer is standing on the stage in front of a microphone, her face wringing out as much passion as her voice. It takes a moment longer before I realise that she’s singing a track from Sting’s album “Nothing like the sun”. Somewhat synchronously I look up at the starless sky and catch sight of the three-quarter moon just above the tiled rooftops.

“Sister moon, will be my guide.
In your blue, blue shadows, I will hide.
All good people asleep tonight,
I’m all by myself in your silver light…”

I don’t bother to look for the sticks; I remember now that they have been moved to a storeroom in a building further up the hill (the same place we conducted the bai shi ceremony a few days before). So I leave the lights of the gymnasium doors and plunge once more into the shadows hoping to find the storeroom and hoping it will be unlocked…

As I limp up the hill the singing voice fades and my mind wanders from Sting, to the moon and then to synchronicity. Synchronicity is, of course, a term coined by Swiss Freudian psychiatrist Carl Jung to describe (apparently) meaningful coincidences; disparate events that are not causally linked but are somehow correlated. This theory is closely related to Jung’s other theory of the “collective unconscious” and the broader notion that all living things connected at some “cosmic” level. 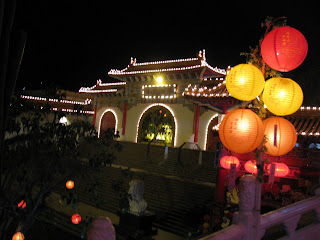 My late father was a firm believer in spiritus mundi. It was in this context that he and my mother would often read the Chinese classic called the I Ching / Yi Jing (Book of Changes). The I Ching is a Neo-Confucian philosophical treatise, however it was/is used by many (including my parents) as a means of divination - a way of tapping into synchronicity via the collective unconscious.

To ask a question of the I Ching, all you have to do is throw 3 coins, 8 times. How the coins land is said to reflect your thoughts – and hence the universe with which your thoughts are inextricably linked – at that exact moment. A particular (traditional) matrix provides a means of decoding that coin sequence. Once decoded, you go to the relevant chapter which will synchronously pertain to your question, or at least the thoughts that occupied your mind at that moment.

The truth of the matter is that, much like other Chinese classics, eg. the Tao Te Ching / Dao De Jing, the I Ching can probably be opened at any page to reveal a truism. And a truism will serve as good advice for (and appear entirely applicable to) any particular situation.

I’m struggling up the final, steepest, part of the hill to the storeroom, simultaneously recalling the events of the previous days. In particular I’m thinking of our practice of baguazhang (which is said by some to be the physical embodiment of the I Ching). I also remember how, earlier that day, my good friend Tony Nguyen took me inside the base of the giant Buddha where I had a “reading” from a monk. We walked into a little chamber, paid our respects, then took a random scroll from a bin. A monk then read out and interpreted the scroll. From what I could tell, the idea wasn’t to tell your fortune; rather it was akin to the I Ching – the scroll would reflect the moment and contain advice synchronously pertinent to your situation.

The advice I received was just this: “That which you seek, you have already found.”

Last year I had the good fortune to interview prominent BJJ instructor John Will on the Combat Sports Show on 91.3 SportFM [I hope to have the full text of this interview transcribed for this blog in the future as it was highly informative and entertaining.] John noted how receptive you become to certain information once it assumes relevance – where otherwise that same information might be filtered out by your mind. So does that pile of free bricks on a verge “suddenly materialise” when you’re looking to build a barbecue – or is its synchronous appearance attributable entirely to your heightened awareness of the need for building materials? 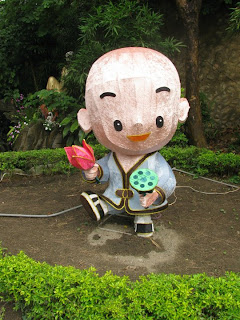 Either way, I’m looking for both a stick and a certain peace of mind, and I'm not having much luck finding either.

In the darkness I grope for the handle of the storeroom only to find it locked.

On the way back to my room I search amongst stray groves of bamboo, along promising fence lines and in strangely-placed closets in rabbit-warren buildings – but ultimately to no avail.

Finally I’m standing in the chill breeze outside the main eating hall that is only metres from our accommodation, considering one of the many cartoonish paper monks. This one has a staff braced across his shoulders, 2 pails dangling from either end. It seems strange that I never noticed it before: the staff is exactly the right size and diameter. For a brief minute I toy with the idea of “borrowing” the staff; it is connected to the pails very loosely, after all. Then the absurdity of the situation hits home.

Is my troubled mind really burdened by a missing stick, a too-hard bed, forgotten reading glasses, an injured back and the other health issues and challenges I face? Are life’s frustrations the result of such external factors – or are they attributable to how one thinks of them? Is synchronicity working against me in as much as my mind is not filtering out information it otherwise could - and should? 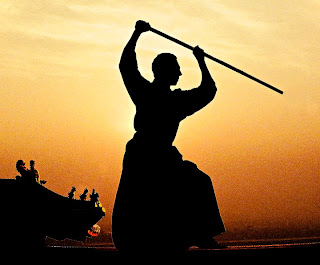 For a moment I recall the story of the Ten Blind Masseuses. Then I realise that somewhere between the locked storeroom and the cartoonish paper monk whose staff I was thinking of "borrowing", I had actually started to enjoy myself. Walking out in the fresh early morning air had gone from a dispirited search to a pleasant experience. Happiness, it seems, is found not in the presence of “happy thoughts”. Rather it is found in the absence of unhappy ones. Feeling a greater sense of peace than I have in many months, I wander back to my room and into bed.

The next day’s photo shoot does not go on as scheduled. But it does go ahead later that day. The stick I end up using is, ironically, the very same one I picked up on my first training in the gymnasium. Yes, it is manifestly too long. But it can be - and is - miraculously shortened using Photoshop. That which I sought, I had already found.

The night photos and the photo of the "paper monk" are courtesy of my new Chen Pan Ling brother, Rob Himes. The photo of the moon was taken by my brother Nenad almost exactly 28 days after the events described in this blog post. The photo of me with the jo is a composite of 3 photos taken by Lucia for the cover of my forthcoming book “Essential Jo”.