Sorry shouldn't be the hardest word 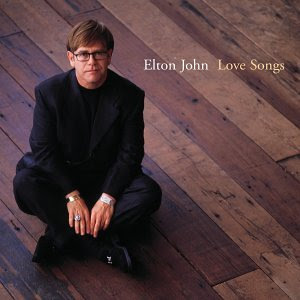 Many, many years ago I got into a debate with the manager of a different division at work. It concerned at technical/operational matter. I felt strongly that a particular rule was too inflexible and was causing inefficiencies. The manger disagreed. The debate became quite heated, particularly on his part.

Afterwards I went back to my desk and reflected on what had gone wrong and my part in the fracas. Yes, I felt I was right in my arguments. But I could see that I had upset him, and this troubled me. I realised that I had, inadvertently, made him lose face in front of his subordinates. I also realised that, regardless of the merits of my argument, the issue was his to resolve, and his alone. So I went back to him and, in front of astonished onlookers, apologised. I said that I was wrong to have argued with him - that the call was his and that I would respect it.

When I got back to my desk, 3 or 4 of his subordinates (who disliked his managerial style, to put it mildly) approached me separately to remonstrate about my apology. "Why did you do it? You gave in to him - when you were in the right!" They saw it as an embarrassing backdown. But you see, it was no such thing. I identified the wrong I had committed, and I took ownership of it.

Similarly, just this year I posted something on Facebook concerning a matter that obliquely referenced religious views. I forget exactly what it was; something about which I felt strongly. Gay marriage might have been the topic, but I forget. That part is irrelevant. What matters is that I ended up posting something that offended a religious friend of mine. He sent me a message telling me so.

My first reaction was to debate the issue further. Then I realised: the subject of the debate was irrelevant. What had offended my friend wasn't my support for gay marriage nor my lack of religious belief - it was the way I had denigrated those who might hold religious views of his kind. And in this respect he was absolutely right. I had been rude. Period. 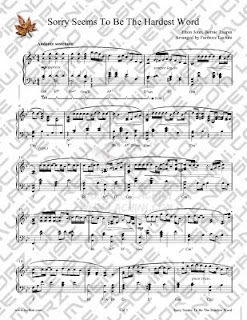 So I apologised unreservedly. I had been rude. There was no way around it. Did this mean I conceded my philosophical etc. point? No. But that point had no bearing whatsoever on the apology that was due. What had hurt my friend wasn't the view. It was how I had spoken/written to him. An apology from me was forthcoming.

I never feel "bad" for apologizing. I never feel I have "egg on my face". Nor do I feel I have retained some kind of "moral high ground". In other words, I don't feel "good" for doing it either. All I have done in such instances is to take some small steps to correct my wrong; to make amends. That is all one can do. And it is the least one should do.

So it surprises me to see how some people struggle with saying sorry.

Just recently I was caught off guard by some rudeness shown to a family member of mine by someone who is supposedly "close" to them. The hurt caused was immense - and totally unnecessary. The issue in dispute is, of course, irrelevant; in this case the hurt was caused by the way this person expressed their view, not the view itself.

Now it's true that this person has since apologised. Unfortunately it was no more than a "Claytons1 apology". You know the kind: "I'm sorry that you feel upset," or "I'm sorry you feel the way that you do." It is the apology you give when you're not giving an apology. This just doesn't cut it. We all have to own up to our mistakes. It doesn't matter if we feel we have "right" on your side. Whatever we feel about the merits of our case, in any argument there is usually always something that we could have done better; something that contributed to the other person's hurt needlessly. Discretion is always the better part of valour. Sometimes we must choose our words with utmost care. In others, there is simply no point saying anything at all, regardless of our views - our words will bring nothing but ill.

And I always take the view that it is irrelevant whether the other person "owns up to his or her mistakes as well". You need to own your mistakes. What someone else does or doesn't do is irrelevant. That manager with whom I disagreed never apologised to me for speaking to me in a dismissive, arrogant way. But I never expected such an apology, nor have I ever lost sleep over it. People will do what they will do. You can't hold your own apology ransom to the other person's. You have to own up to the part you played and you must do so fairly and squarely.

What they do or don't do is irrelevant to what you must do.

So when I read the Claytons apology that was given to the member of my family, I had to shake my head. After more than 4 decades on this planet, you'd think that this much would be obvious:

A Claytons apology is always much worse than no apology at all. 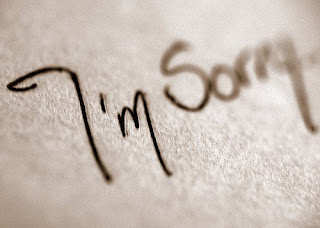 Many people I've spoken to over the years say they have no regrets about their lives. I admire them, but I can't share this sentiment. I regret many things that I've done and said - and things I haven't done and said (but should have).

So I'll freely admit to a "bucket list" of apologies I've yet to make. A couple of years ago I bumped into an old primary school friend and apologised for being nasty when we last spoke in the 7th grade (he graciously pretended he didn't remember, when I know for a fact that he did from what others who know him have said over the years). Ditto to a high school pal whom I once reduced to tears through my sharp tongue. Ditto to the high school prom date whom I neglected to compliment and make feel special on her special night. And so on.

Why do this? Well it doesn't "salve my conscience" if that's what you're thinking. That would be both a stupid and selfish motivation. Furthermore, I know only too well that I'm no hero for such small and ineffectual measures. Last, I certainly won't regret my mistakes any less.

However apologizing lets me do what little I can do from stopping the wrong from continuing. For whenever we cause someone hurt through things we say or do, we commit two wrongs: the wrong of the initial act/words, and the wrong of not admitting it. We all need to take ownership of our mistakes - no matter what "the other guy did". A wrong is a wrong. Period.

Sorry shouldn't be the hardest word. It should be the first. And it should be unreserved - otherwise it is just another wrong, ladled on top of the others.

1. Claytons is a non-alchoholic beverage once marketed as "the drink you have when you're not having a drink".