September 24, 2012
The idea for a tax levied automatically on all financial transactions first came to me in the early 90s. I was drawing my first salary after university - and dreading completing and filing complex tax return forms. At the same time, the dawning computer/internet age had made such a concept technically feasible for the first time in history. 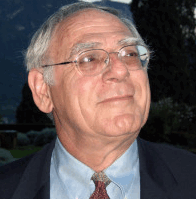 Today, this tax concept is most commonly known as the "Automated Payment Transaction Tax" or "APTT" - a term coined in around 2005 by American economist Professor Edgar L Feige - or just the "transaction tax".

As many of my friends will recall, I championed this tax concept for some time for all the reasons Professor Fiege mentions in the above link: the APTT provides a naturally progressive and "fair" taxation regime, requires very little administration by anyone (the "automated" nature means no one would have to file a tax return ever again), captures a very large tax base and functions on a very low rate (some say as low as 0.1%. but probably around 0.3-0.4%). It is also a very hard tax to evade.

But the APTT is not without significant drawbacks; we can be fairly sure of this even if the exact nature and extent of these drawbacks is hard to quantify. After all, if the APTT means that a banker "would keep $996,500 of his $1 million bonus" you have to wonder where on Earth the government's tax revenue is going to come from: someone has to pay for it. And whoever is doing the paying is going to pass that cost on to the banker as well as the rest of us. That, in a nutshell, is the problem with the APTT.

But let us examine it in a bit more detail:

But forget how much you are directly taxed (ie. on your own transactions): the bigger problem might actually be the indirect tax you will pay - ie the "cascade effect" both on:

• increasing the cost of your purchases; and
• decreasing your income.

As to increasing the cost of your purchases, consider a commodity that has gone through hundreds (if not thousands) of steps to get to you - eg. a manufactured product or a highly processed agricultural product like white rice, flour or sugar. The tax will be levied at each point, possibly multiple times (if cheques need clearing, amounts are transferred from one account into another by a particular person, etc.). This "cascade effect" makes it very hard to determine how much prices might go up. In Australia, the effects of the GST, and more recently the mining tax and carbon pricing, have been the subject of much debate. Just the other day the proprietor of my favourite pizzeria told me that he would have to raise the cost of his pizzas to match the "cascade" effect of carbon pricing, imposed at every stage preceding the baking process - from wheat growing and harvesting, to flour milling, to wholesaling, to transport etc.

As to income, taxing a particular industry (ie. share trading) that is currently not taxed directly on its activities (though of course it is taxed in other ways, eg. corporate taxes, directors' and shareholders' income tax etc.) might seem quite fair to the average non-Wall street trader. But it also means that taxes will have to paid out of such things as superannuation and pension funds. So the effect is not limited to "nameless, faceless" corporations, but is ultimately passed down to "everyday" individuals - some of whom might already be struggling. 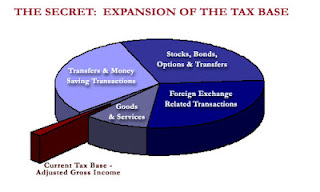 Then we need to look at the tax base: currently most financial market transactions don't incur any tax. But once corporations start paying 0.3% on every transaction, I think it's fair to say that they will hastily change their business practices. How, and how much, are unknowns: they might move all trading transactions off-shore, for example. And even if every tax haven were closed and the whole world adopted an APTT, we would still have no way of knowing how market trading would adjust. This means that a substantial portion of the tax base would be uncertain - and we have no way of knowing whether, say, a rate of 0.3% would be enough to guarantee sufficient tax income for the government. And if the government had to raise that tax rate, we would again have no way of ascertaining the flow-on effects.

We pay so many indirect taxes already that you have to wonder whether the effects to which I refer would be all that drastic overall (and I stress "overall" – the devil might be in that detail). Furthermore, corporations (and individuals) would collectively save billions each year on accountant and lawyer costs (which might not make the tax popular with these professions!).

But whatever the overall outcome, I think we can be sure the tax would produce some very strange, unpredictable results. We might find that middle-class people in, say, the US could no longer afford a plasma/LCD large-screen TV or Blue-Ray player (causing a collapse in the Chinese industries that churn out these products).

Or these products might actually become cheaper because they are produced in a country where there is no such tax (presuming the number of "middle-men" in the US are kept to a minimum). Correspondingly, the remaining US manufacturing industries, already struggling to compete with cheaper labor costs overseas, might go belly-up as as a consequence of the APTT's "cascade effect". Who knows?

In the US, bananas might be half the current price while the cost of white bread might quadruple (causing a crash in at least one part of the US primary industry sector). 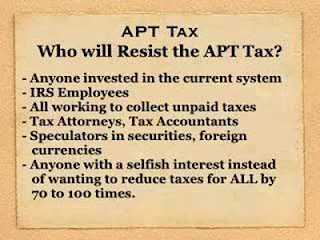 What we really need is for some government to trial the idea somewhere - eg. on a small island that has its own economy and the residents of which can be guaranteed an "at worst neutral" outcome by its larger parent state. Norfolk Island (a territory of Australia) comes to mind (though I suspect the Norfolk Island locals - who pay no income tax at the moment, though they do pay indirect taxes on goods etc. - might have something to say about such a suggestion!).

Until we can assess the results of such a small-scale trial, I suspect that everything is theoretical; I doubt even the most sophisticated computer modelling could sufficiently account for the variables of Chaos Theory to permit any conclusive predictions.

Even with such a trial, I wonder how revealing it would be to do a study on a small, isolated economy as opposed to a large sophisticated one that interacts significantly with other economies.

In any event, I get the feeling that this sort of tax is never going to be trialled anywhere – ever. The (potentially far-reaching) "cascade effect" and the (almost certainly shifting) tax base conspire to make governments suspicious of such a concept from the get-go. The largely unpredictable effects of such a tax are probably the reason there is so little discussion of it – whether in academia, mainstream politics or even here on the web.

[The wikipedia APTT page is disappointingly light. On the other hand, here is one scholarly article from the World Bank Research Development Group: it concludes that an APTT would be neither panacea nor threat but rather a "damp squib".]

In the meantime the APTT remains intriguing, especially because of its elegant simplicity. We all know that existing tax systems across the globe are far, far more complex. But is this a symptom of "poor structure" - or just necessary evil?