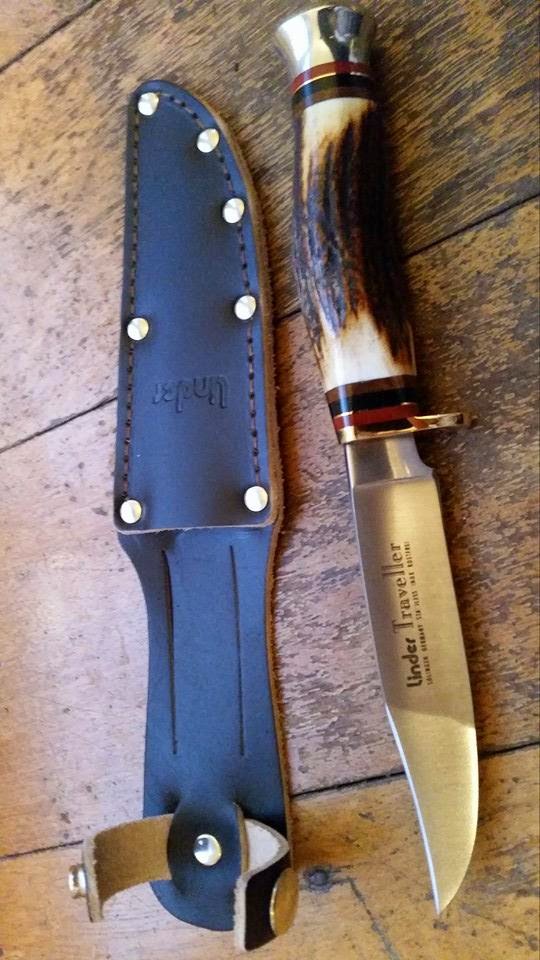 Some of you might recall from my essay "My unlikely relationship with the jian" the story of how my father bought me a hunting knife when I was 7 years old - and how I lost it.  In fact, it wasn't "lost" so much as stolen.  Now, after almost exactly 41 years, I have it back.  Almost.  Anyway, here's the story:

You might remember that my father and I entered a rather smoky little specialist blade shop somewhere in downtown Belgrade in December 1972 where he bought me a lovely bone-handled hunting knife.  It seemed like a large Bowie in my child-sized hands.  And it was love at first sight.

I took that knife home with me to Papua New Guinea.  Back then we were living in the tiny hamlet of Kavieng on the northern and western tip of New Ireland, just 100 km south of the equator.  It was a hot, sticky, remote and totally undeveloped corner of the world where remnants of World War II were still "fresh" - at least in a decomposing, oxidising yet jagged, sharp and nasty equatorial jungle sort of way.

It was precisely this environment that my precious new possession - probably the only personal material gift my father would ever give me - went.  And it seemed perfectly suited to its new home.  Looped into the belt of my khaki shorts, the leather sheath kept the trusty stainless steel blade safe and always ready to be used - to cut that vine, whittle that stick or prod that war munition (I know - it was a crazy time).  For a while, the Bowie and I were inseparable: young boy and hunting knife joined at the hip.

Then the unthinkable happened.

I was playing in our front garden.  I remember it so well.  There was a huge pile of leaves and flowers at the base of a giant jacaranda tree which leaned over from the neighbouring property, and I had been playing in them, piling them up high to make a kind of "cave" supported by a flimsy framework of sticks.  I was lying on my side in the "cave" and the hilt of the knife was digging into my hip, so I took my belt off, pulled the sheathed knife out and put it down next to me.  I remember looking up into the sky and seeing a neighbouring New Guinean boy of roughly my age high up in the branches.  He was spying my knife.  I knew he wanted it - but he wasn't going to get it.  So I thought.

Later that afternoon the sun sank low, well beyond the breaking surf on the reef, the street lights abruptly flickered on and I was called inside to dinner.  I realised almost as soon as the screen door slammed that my beloved knife wasn't on my hip as it habitually was.  I knew exactly where I could find it.  So, despite my parents protestations and threats of punishment, I ran outside to the leaves.  High up in the jacaranda tree I could see my neighbour clambering back over to his side of the fence.  And I knew exactly what had happened, even as I frantically combed through the now dismantled pile of leaves and sticks in the half-light. 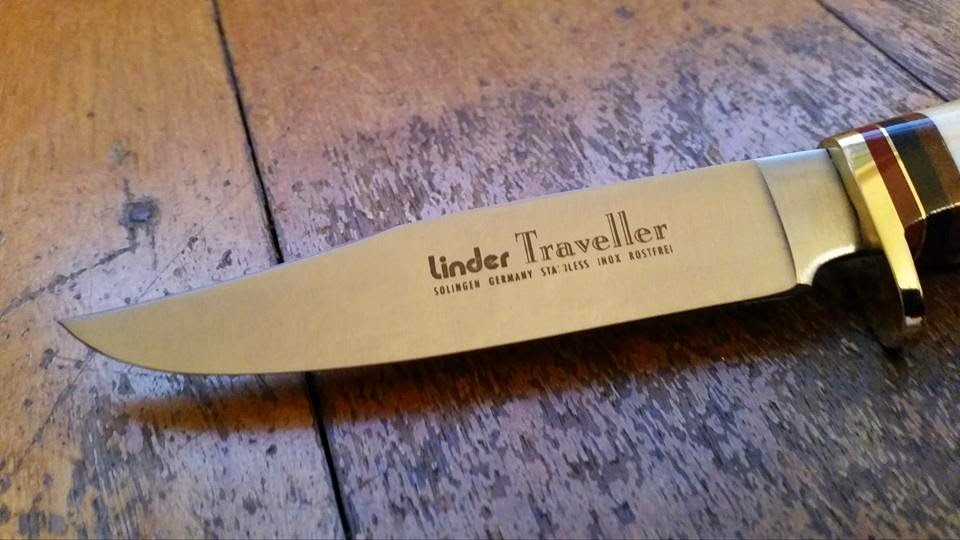 The knife was gone.

How I've beaten myself up over that knife.  It's loss has haunted me for decades.  My failure to keep something so precious, so valuable in the most sentimental of ways, was sometimes more than I could bear, particularly after my father passed away prematurely.  Particularly because it came to symbolise one of my few "connections" with the old man.

He was a brooding figure, prone to sitting quietly, lost in his own thoughts: a sombre, meditative person with a tendency towards melancholia offset by sudden bright joviality.  His fractious personality meant that I never knew what to expect and regarded him with a kind of wary reverence.

He would come home from work and sit in the kitchen of our old weatherboard house, dressed only in his underpants and a singlet, using the big breadknife to smear slabs of unsalted butter on thick hunks of bread.

I would sit nervously next to him while he buttered the end crust for me.

He was also the menacing figure who, belt in hand, towered over my crayons and me, glaring at my artwork scribbled on the wall or in his precious encyclopedia.

He was the guy who let me tag along with him into town on Saturday mornings, saying almost nothing.

He was my old man.

When he passed away I had little to show for our patchy, "afterthought" relationship.  That knife was pretty much all I would have had.  My father and that Bowie seemed to be irrevocably tied together.  I'd lost the latter.  The absence of the former somehow seemed to be attributable to my neglect as well.  Whichever way it went, they were both gone.  And I was at least partially responsible.

It's fitting that my father and a blade should somehow be bound together so tightly in my memories.  After all, he was in so many ways a fighter.  He opposed corrupt officialdom (in Communist Yugoslavia), resisted blind prejudice and (sometimes hostile) indifference (in our adopted country, Australia), and here (in PNG) he firmly negotiated the clash of stone and space ages - unflinchingly pressed into the sparks where steel meets grinder. 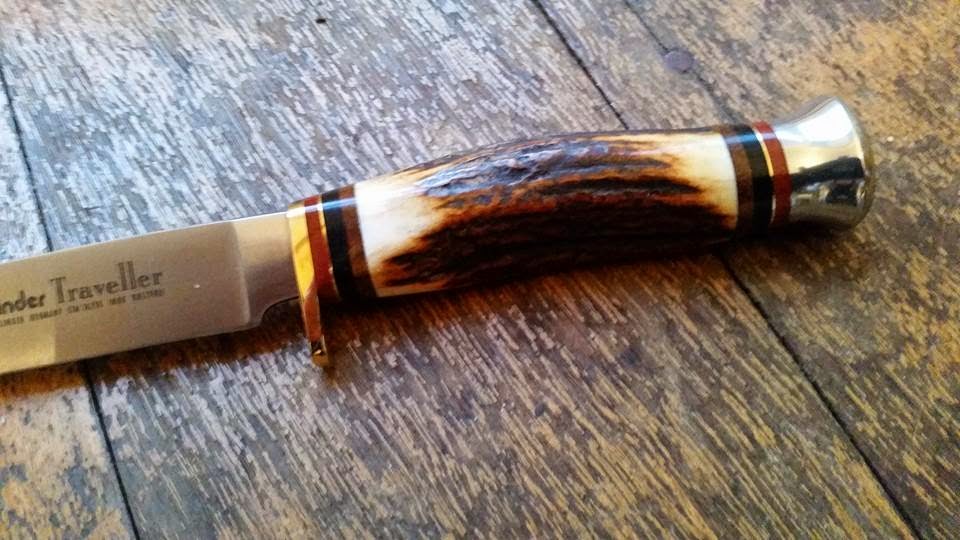 For example, one night in Kavieng our little house was invaded.  It seemed that my family had unwittingly been caught in the middle of a vicious tribal custody dispute concerning a infant native girl our servant Boma had taken in "for a few days".  The girl's father had come to reclaim her.  At about 3:00 in the morning our lounge room was abruptly full of large, sinewy men, the smell of salt and underarm sweat thick in the air, my father jostling, then punching them out into the corridor, one after the other.  It was a scene reminiscent of the movie 300, with my father using the narrow passageway to keep his opponents one-on-one.

And I remember the moment of which I was most proud of him: the night he delivered the cleanest knockout punch I've ever seen:

We were living in Port Morseby, where the evening air always smelled of fish and salt as it wafted in from the harbour.  Another expatriate couple had come over for dinner.  The woman was an Aussie: a quiet, slender blond girl.  The man was a fellow Slav - a dark, sinister sailor who happened to scare the living sh*t out of me but who my father seemed to tolerate in the house for reasons unknown.

We kids were dispatched to our beds but we couldn't sleep, lying in our respective pools of sweat under the humming ceiling fans.  I recall I was at the point of dozing off when all hell broke loose.  It seemed our dour sailor guest had started to verbally abuse his female companion in a slurred, alcohol-fueled way.  My father told him in no uncertain terms that this behaviour was unacceptable in his house.

My brother and I reached the corridor just as the male guest had slapped his partner full in the face.

I remember my father rising abruptly out of his chair.  The sailor was already standing in the middle of the lounge room, hands outstretched defiantly with inebriated swagger.  Then my father punched him - square in the jaw - and knocked him right across the room and into the trembling asbestos wall.  It was one of those John Wayne punches, the kind that seems to wind up forever then explodes with all the force a bear-like man can deliver.

After that my brother (who had loaded both his fists with C batteries just in case) and I saw our dad wordlessly grab the sailor by the scruff of his neck and seat of his pants, and heave his ass out of the front door and down the steps into the front yard.  Fight over. 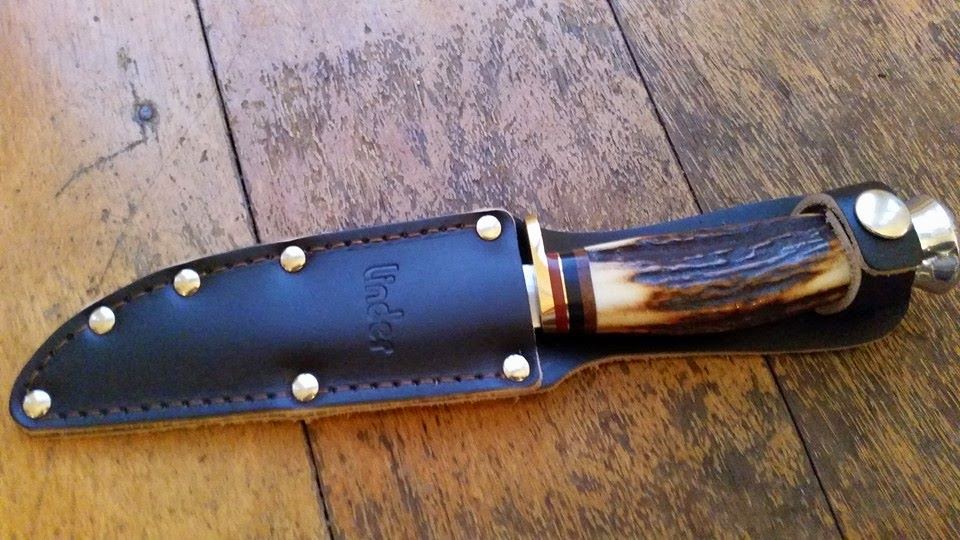 Years later I remember my father scoffing at my karate, then proceeding to pound a heavy boxing bag with his ungloved fists, bending it double.

When I got word of his passing he was only 48 - the same age I am now.  I was a thousand miles away on a different continent.  It seemed impossible for someone so powerful, so passionate, so full of energy to be gone.  Yet it was true.

In the years since then I've often thought about my "old" man; how much he shaped me and what sort of legacy he'd left.  Was I the sort of son of whom he'd have been proud?  He never lived long enough for me to find out.  I don't suppose he'd ever have understood my passion for the traditional Asian martial arts.  He'd be scoffing in his grave right now, I'm sure.

Except I'd lost it.

I don't know what possessed me, but just last month, almost exactly 41 years to the day after I'd lost it and just after what would have been my late father's 78th birthday, I decided to look for my knife.  Not the actual knife, mind you (that has almost certainly disintegrated in the equatorial jungle somewhere on New Ireland), but a knife of exactly the same brand and size.  Something told me it was a German make.  But I wasn't even sure about that.  All I knew was that it had a stag horn handle and a Bowie-shaped blade.  I knew I'd know it when I saw it.

So I started searching.  I took to eBay where all my search terms initially came up with nothing.


Then, abruptly, I found it.

I knew instantly that it was the right knife.  There was simply no question.  It was just as I remembered it from all those years ago: a Linder Traveller II - a German knife, as I suspected.

I ended up plugging in "fixed blade" and scrolling through 240 pages of other eBay knives to be sure, staying up until the wee hours.  Then I went through every knife on the Linder catalogue.  Nothing came close.  This was the same knife - beyond a doubt. 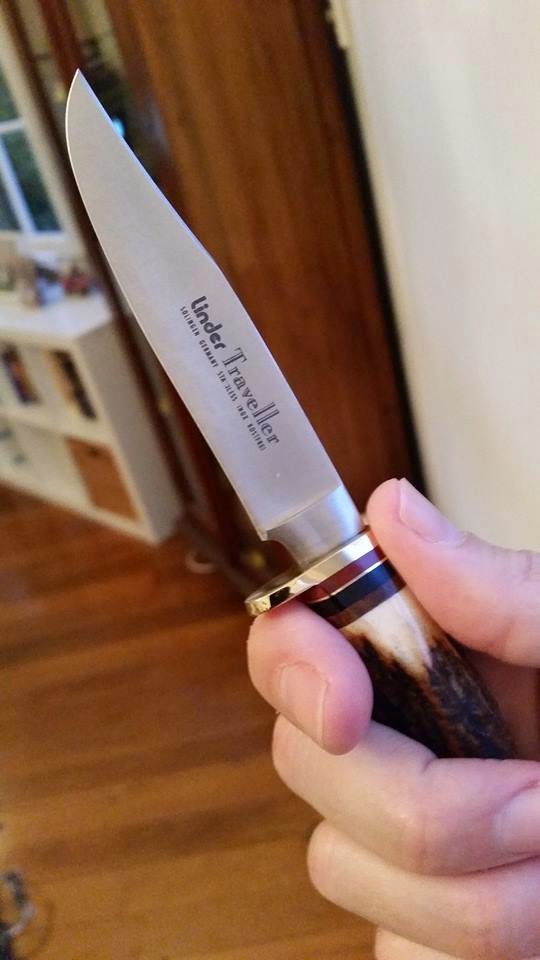 So I ordered one.  And just yesterday it turned up in a package at my front door.

After all these years I was looking at my long-lost knife once again.  It seemed that a part of my father had come back to me.  I must confess that my eyes welled with tears.  My daughters hugged me.  I'd even chosen the right size: comparing it to my youngest girl's hands, I knew it was exactly what my father had bought for me.  What I'd lost was now regained.  The chapter was finished, the book was finally ready to be closed.

My father and I might not have agreed on anything martial - and many other things besides.  But here was one thing on which we agreed.  It was where our psyches met; on the thin edge of a knife blade.  It might not be much, but at least I have that back in my hands once again.

And this time, I won't be letting it go.