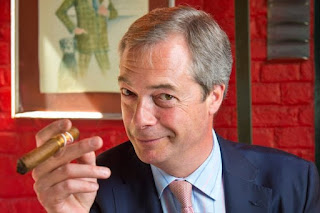 Well the Brexit fallout is now upon the UK and prominent "Leavers" like Nigel Farage are attracting their fair share of criticism, indeed
"demonisation", both by "Remainers" and those suffering "Regrexit".

Is this fair?  Given how the Leave campaign was conducted and the possible (indeed likely) consequences, I say yes.

In the video below, Professor Michael Dougan outlines (precisely and accurately) not only the inherent dishonesty of the Leave campaign, but also the effects of the referendum result.  In particular he discusses the issues that confront lawmakers in deciding how, if at all, to implement the Leave decision, and the constitutional crisis now facing the UK as a consequence.

In these circumstances I think it is entirely fair to focus ire on those leading a campaign that was fundamentally misleading and dangerously divisive and irresponsible.

Consider Farage in particular. I see him as a figure who deserves "demonisation" precisely because he is somewhat "demonic" - albeit in the rather banal guise that bigoted nationalism and jingoistic patriotism generally wears.

The worrying thing for me is that people like him hijack real issues, like immigration and globalisation, for their own purposes, obfuscating them so they cannot be discussed in the absence of an agenda (in Farage's case, an "independent UK", whatever that means).  This is a process some have labelled "Trumpism" (see below):

I believe that's what has happened in Brexit. Farage set a lure, David Cameron fell for it, and millions were swept up in a proposal that had no plan and was never intended to have a plan.

And it is important to note that some serious economic, political and legislative analysis and planning were necessary to ensure any sort of safe, responsible exit from Europe. This should have been done well before any referendum. But nothing like this happened.  Cameron and the "Remainers" never expected a successful Leave vote, and so they didn't bother exposing the complete lack of any Brexit plan (or any other contingency plan).  Johnson, Gove et al didn't expect to win either - so they saw no need to create such a plan.  I don't think Farage was remotely interested in the specifics of a plan - whatever the outcome.

Compare the referendum on Scottish independence: debated over a two year period and accompanied by a 670 page white paper published ten months before the vote.  By contrast, the Brexit referendum was debated over a ten week period.  And the Leave campaign couldn't muster more than a 16 page pdf in large font - a total of 1293 words.

And so the UK is left with what is, frankly, a ludicrous, unworkable referendum result that, ironically, does not address any of the issues raised as motivators, but if implemented will cause a lot of pain. How long it might take to disentangle the UK from Europe - with all its current myriad complex regulatory and economic ties - is anyone's guess. But all the experts will tell you it's pie-in-the sky to imagine any result but a recession - likely on a global scale, never mind in the UK.

And that says nothing of the very real possibility of the total breakup of the UK.  Scotland is already talking of a second independence referendum.  Northern Ireland is in an uncertain (some might say untenable) position that does not really allow it to remain in the UK for any length of time.  Wales might have voted by majority to leave, but this seems more of a protest at being ignored by Westminster.  The heavily EU-funded country might hang on with England for a while, but I see it ultimately splitting off from England the way Montenegro split from Serbia.  Then the Balkanisation of the UK will be complete.  "Great Britain" will become "Little Britain" (see the video below).

But this is all predicated on Brexit going ahead. I hope it doesn't.

So forgive me, but I'm inclined to demonise populists like Farage who peddle non-solutions to social/political/economic/legislative problems - just as I am quite inclined to demonise those who peddle quackery instead of medical science. It is, after all, political science in which Farage is meddling - yet he is to this field what an anti-vaxxer is to medicine. And millions of decent people were taken in by his "solution" - with virtually no effective response from Cameron or the other "Remainers". All because the establishment (particularly the conservative side) were too arrogant to acknowledge this petty nationalist as a threat - and anticipate the rising tide of disenchantment with establishment politics (with which I can sympathise) resulting in an honest, but misguided, protest vote.

In my view, Farage and his ilk deserve all the trashing they can get. Not that it seems to bother them particularly (see below)...