Lately I’ve seen this video by JP Sears popping up on my Facebook feed (it was preceded by this video). Some people seem to think it’s awesome. I can explain exactly why it isn’t.* The problem is with the analogy.

Life jackets are intended to save one person alone - and only when that person is immersed in deep water. By contrast, vaccines are intended to stop the spread of disease in society (in which we all live most all of the time, barring wilderness isolation, quarantine, etc.).

All analogies are faulty. But if you absolutely need one, you’re better off comparing apples to pears than apples to, I don’t know, refrigerators.

Accordingly, a more apt comparison to the Covid-19 vaccines would be the smallpox vaccine.

Okay, it concerns a very different disease - but at least it is a vaccine (against a virus too). Yes, smallpox is the more deadly/dangerous disease - by far. However, Covid-19 does kill (at around 10x the rate of influenza, according to the John Hopkins Medical Institute). And even if you survive Covid-19, you can suffer permanent effects, including organ damage (see the Mayo Clinic’s summary here).

Okay, it’s not quite smallpox - but we are talking about an analogy. All analogies are imperfect. But in this case, at least the principle issues and responses are the same - the differences are just a matter of degree.

How about the life jacket analogy? Unlike a vaccine, life jackets only exist to protect you. They aren’t intended to protect others from you. And their use is restricted to one very specific situation - not every situation in society.

This is the point where those who are against vaccination start arguing down a different path. They say:

“But the vaccines don’t work!”

“Ah - but if the Covid-19 vaccines worked, why do we need boosters? Why are you simultaneously telling me that they work and that they don’t?”

Umm… they work, just not perfectly/absolutely. It’s worth remembering that the smallpox vaccine didn’t stop some people getting that disease. But at least they were spared most of the symptoms - including the majority of the disfiguring scars. Consider the following picture of twins, one vaccinated, one unvaccinated. 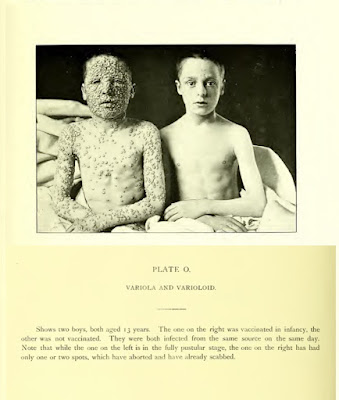 Umm… yes, it did/does. In the event of an outbreak, the CDC recommends boosters every 3 years. Why haven’t you needed one? Because if enough people get vaccinated, a disease is eliminated: it just can’t spread fast, or widely, enough to remain viable. That’s what’s happened with smallpox. If enough people had refused / were unable to get the vaccine, you can bet your bottom dollar it would have mutated into more and more virulent, vaccine-resistant strains.

I’m sad to say, that’s unfortunately what’s happening with Covid-19. If the same had happened with smallpox, you and I - all of us - would either be battling smallpox or getting constant boosters (with new vaccines constantly having to be invented as the old ones become increasingly less effective).

Back to life jackets: do you want to make the analogy more apt? Imagine if we were all immersed in deep water, tied together.

Those without life jackets would, at some point, be unable to tread water any longer, drown, and pull us under with them.

* In this essay, I won’t be addressing the fact that no vaccine (indeed, no medical procedure/intervention) is without risk. But I hold it to be self-evident from the data that the risk from the disease totally eclipses the risk from the vaccine in this case. And I won’t dignify Sears’ conspiracy theory claptrap about scientists/government  changing “definitions” etc.

A few days ago I dropped my keys at the front door. They hit my shin and scratched it. Two days later the site was swollen,  hot and full of pus. I had a fever. Yesterday I was put on antibiotics.

The reason for this extreme reaction to a minor scratch? I’m on immunosuppressant medication. Like many other people, I am especially vulnerable.

The upshot is that I don’t want unvaccinated people around me because they are much more likely to have Covid-19 and give it to me - and I can’t afford to get it (which I might despite being double vaccinated and boosted) because my weak immune system means it could kill me.

So spare me the swimming pool life jacket nonsense. It doesn’t just insult my intellect: it endangers my life.