The uselessness of polls and unsupported tanks

November 13, 2022
I had the dubious pleasure of reading this article by Nate Silver on Fivethirtyeight in which he tried to muster a lukewarm argument against critics of poll-based electoral predictions. Reading it, I got the feeling that it was an attempted response to recent arguments by various observers about the growing irrelevance of Silver, his poll algorithms (which have been more miss than hit since the 2016 election) and of the uselessness today of landline-based political polls.
Arguments like this:

Indeed, Fivethirtyeight’s 2022 predictions have been almost as useless as their predictions for a Clinton win in 2016.

It makes me think of how the use of tanks in warfare has changed since WW2 - especially their use without infantry support in an era of guided missiles (javelins, NLAWS, Panzerfausts etc.) and drones.

Just as tanks retain a role in modern warfare, polls are useful in predicting political outcomes. You just need to understand the limitations of both - and use them correctly.

However, the Fivethirtyeight “aggregate” approach to landline polls is about as effective as the Russian tactical use of the tank in the Ukrainian “special military operation” - i.e. not so much.

Let’s consider Fivethirtyeight’s predictions for the US midterm elections. Obviously, we now know that they weren’t particularly useful as regards predicting the Democrats’ chances in the Senate. 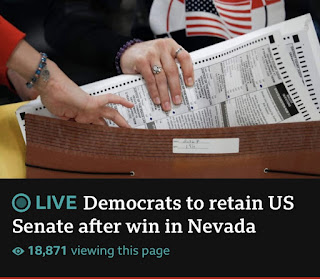 However, I think it goes further. To state the obvious, the “red wave” anticipated (at least by implication) by Fivethirtyeight never eventuated.

I would go yet further. I personally think the Democrats might even retain the House (perhaps by a slim margin, but still).

Obviously I could be wrong. But at least I’m looking at actual data: the number of early votes, increased registration of women and Gen Z, etc.

Furthermore, when you examine this data in the context of the post-vote data - the remaining uncalled House districts, the present vote count and demonstrated trends in late surges for Democrats (think Cortez Masto for one) - the error in the “doom and gloom for Democrats” forecast created by formulaic, tone-deaf landline polls becomes apparent.

The fact that these polls are based on responses from a weird demographic of those few people who still have landlines and are willing to talk to pollsters should be enough to establish that such polls have become as irrelevant in the modern era as unsupported tank warfare facing guided missiles and drones.

Obviously, Fivethirtyeight will point to “margins of error”. The problem with this is that their predictions are now so reliant on these margins of error that they have become meaningless: