Memories of Taiwan: the calligraphy master

The most enduring memories I have of my trip to Taiwan are of the locals we met, in particular one or 2 very remarkable individuals. The calligraphy master was one of these.

My good friend, photographer Lucia Ondrusova, had asked whether I would be interested in accompanying her to the master's house/shop. Almost everyone in Kaohsiung lives and works in the same space, and their shops generally stay open till late in the faint hope of extra custom. One of my Chen Pan-Ling martial arts "sisters", Karen Jensen had apparently seen the shop open during the day, and told Lucia, her room mate at our hotel. Having experienced a calligraphy lesson at a Buddhist monastery the day before, Lucia was quite enthusiastic - and I must say that my own interest had been piqued (you can read about the monastery experience here).

As we walked along the ramshackle streets searching for the address it occurred to me that, ostensibly, I not only fulfilled the function of a protective escort (as recommended by the hotel for travel after dark, particularly for women), but Lucia was also under the impression that my (limited) Mandarin might come in useful. In this respect I did feel a tad like the blind leading the blind...

I remember clearly how we arrived at the calligrapher's shop in what felt like the dead of the night; the town had at finally started to shut its doors and put out its lights, leaving us with only the occasional scooter, some yellow street lamps glowing in the haze and the ever-present, sickly-sweet smell of spice, incense, factory solvents and the open sewer.

At first glance the shop seemed closed, but a middle-aged man appeared out the front sidewalk where he had something brewing on a stove top. He glanced up as we approached, his brow furrowed. I was beginning to think this wasn't a place where you could get calligraphy lessons; it was a shop of some kind, but, as I frequently found with older, more traditional Taiwanese businesses, I couldn't make out what they sold. Through the smog-stained glass door behind him I could see some faded, framed calligraphy scrolls; but mostly the narrow, darkened interior seemed to be filled with haphazard books, strewn papers, knick-knacks, festive banners, toy red lanterns and other good luck charms.

"Nǐ huì shuō yīngwén ma (Do you speak English)?" I ventured (it makes life so much easier when you don't have to pretend you speak Chinese). It turned out he did speak a little English - enough to understand that we wanted calligraphy lessons.
"Lǎoshī (teacher) sleeping - come tomorrow."

So the following morning there we were, dodging the organized street chaos, breathing out polluted fog and squinting in the morning light. The shop, now open, looked less like a school of calligraphy than it had the night before; the stove tops on the sidewalk had multiplied, a dog yawned lazily and stretched as I stepped over it. The myriad cooking smells almost overwhelmed the "standard" street aroma. Next to one stove I could see the curved back of an elderly, impossibly frail looking man, a woolen cap pulled over his head. He slowly and gingerly rose to his feet and turned as we came near, as if he could hear our footsteps over the din of the morning rush hour.

The first thing I noticed about his face was the glint in his eyes - like a drop of moisture reflecting the morning rays; a smile suppressed, but on the verge of erupting. 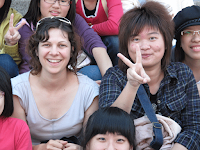 "Errm... Tā (she)," I said pointing to Lucia, "yào (want?)... xué (learn)... xǐe (write)." My Mandarin having been exhausted, I resorted to the time-honoured tradition of speaking English slowly. Everyone knows that English is universally understood when spoken slowly (and even more so when it is spoken loudly - but I refrained from the latter). "You... teach... her... yes?" I added some scribbling gestures to the mix. The master nodded again and said nothing, his smile omnipresent. I thought of trying my Mandarin again when he raised a shaking hand, four fingers outstretched.
"Come back. Four. Today."
"We can't come at four..." Lucia offered. I proceeded to explain that we were away training in wushu... taijiquan... Somehow I doubt I made any sense.
"Tonight... maybe?"
The master was still smiling and shaking his head. "No... No time. Too busy." He pointed at the banners and I finally realized their meaning. It was the day before Chinese New Year's eve. Preparations for family reunions were in full swing. Our request for calligraphy lessons had all the timing and eloquence of a sledgehammer.

Somehow (somewhy?) we blundered on. The master even took us into the comfortable mess of his shop where he tried to locate something (what he was wanting to give us I still don't know). Lucia asked if he had a book he could sell us but the old man shook his head and pulled out one of his own ancient dog-eared textbooks, written entirely in Chinese characters. Nothing there was for sale.

After more tortuous attempts at discussion the master relented. "Come back. Tonight. Eight." 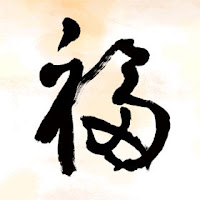 And so that night we found ourselves back at his shop, sitting in yellow lamp-light at a tiny card table that had been set up for us next to the stoves.

The master emerged wordlessly from the shadows with a brush, an inkwell and an ancient exercise pad, each leaf of paper yellowed and brittle. He placed the items methodically onto the table with his quivering, desiccated hands. Then he opened the book from the back as is Eastern tradition, flattening the spine with the heel of his palm.

We watched hypnotically as he dipped the brush into the inkwell and raised it tremulously. For a moment I pondered whether he had enough motor neuron control even to hold it. After all, I had chickened out of the lesson on the basis of my own (benign) hand tremor. For what seemed an eternity the quivering brush descended slowly and erratically toward the paper. When it finally touched all either of us could do was gasp.

The shaking was gone. In its place was sheer beauty. The master's brush swept the page effortlessly, each stroke precise, eloquent, intended; each flourish an act of perfection. He finished 3 characters - the same ones you can see written at the top of this article (not his calligraphy), then turned the page around to Lucia and gave her the brush.

I spent the next couple of hours watching Lucia attempt the characters time and time again. In each case the master would not let her proceed to try another until he was satisfied that she had reached a particular "legible" standard. I was quite impressed with Lucia: she was learning quickly. As I watched, I reflected upon my own training in Taiwan doing Chen Pan-Ling's martial arts; what she was attempting to learn in one lesson was analogous to the material I had just been practising 8 hours per day for 8 days (not to mention for some decades before). It was microcosm of the larger sweeps and movements of taiji.

Occasionally the master would gently say: "Skoshi (little)," showing Lucia how a particular stroke had to be smaller. I was surprised to find myself translating a Japanese word spoken by an elderly Chinese gentleman. It transpired (through minimalist dialogue) that he had been raised under Japanese occupation and that his teacher, whom he fondly remembered, had been Japanese. His own nostalgia for that time was betrayed only for a moment when his eyes focussed dimly into the distance. 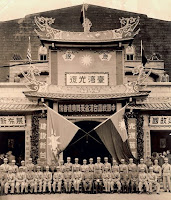 My own mind was cast back to earlier that day when we visited a Hakka museum. There I saw a picture of a pre-war group of school students with their teacher, all dressed in neo-militaristic Japanese uniforms and hats.

The lesson ended in the manner of his brush strokes; with certainty and finality. Nothing needed to be said as he packed away his things. I glanced to Lucia and said to her in Serbian:
"Plati mu nešto (pay him something)." Of course, Lucia is not Serbian, but Slovak. And our languages, while related, are as mutually intelligible as Portuguese and Spanish, which is to say, not really. However Lucia understood enough to whisper:
"Koľko (how much)?"
"Pet sto (500)?" I suggested.
"Ty mu daj (you give it to him)," she said, shoving the note to me under the table.

I spent the next 15 minutes or so imploring the old master to accept our gift for his time. Every exhortation was met with the same gentle smile, the glint in his eye and the small shake of his head. Eventually we parted, wishing we could give something to him in return for what had been a truly remarkable experience. But in the end the master was right. Some things exceed any material value - so any attempt to reduce his gift to a monetary equivalent would have been pointless.

Rather Lucia's room mate Karen suggested that she show her appreciation with her own art; photography. So the next day Lucia went back and took portrait pictures of the master on New Year's Eve. Even on this occasion he seemed to understand her intention with almost no dialogue, posing with dignity at the card table with his ink and brush while Lucia snapped away. When she finished he handed her the ancient exercise book in which he had made notes of exactly the order and direction of the strokes for each character. Then, after ruffling through his store he emerged again with a business card and pointed to the address to which the photos should be sent.

We parted with a bow, a handshake and a wave that lingered like his smile - and the glint in his eye.

Unknown said…
Dan, you wrote it really nice....Reading was like experiencing it again... I - just today bought caligraphy brush and finally going to start practicing what I`ve learned that day :)