It was mid-afternoon half way through the second week of the Decadal gashuku. Tim Hull and I were shuffling along a dusty track somewhere in the African savannah. The group with which we’d started running had long since dispersed; the front pack having disappeared into the far distance while behind us about 20 or so stragglers were spread out over several kilometres. 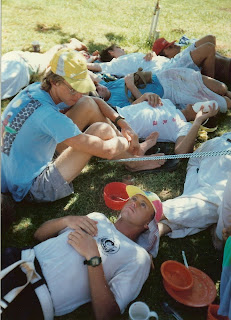 We were about 16 km into what was a half marathon. As trudged along, each step sent sharp spasms up my spine (due to what I later discovered was a fractured vertebra). I reflected on how we had come to be in this position...

The morning had started out promisingly enough; we had a very short run – only 5 or so kilometres – followed by some chi sau (sticky hands drills from wing chun) and then some taiji. So far so good. We had breakfast and rested as the sun came out and the sky cleared away from the previous night’s storm. We were in for a hot, dry day.

Our mid-morning lesson was about to begin and I reluctantly picked up my aching body and sought out my team members. As I was doing so, Deshi Wyatt (one of Bob’s apprentices) came up to me with some “advice”:

“Tell your people to put on their running shoes. And make sure you each have a water bottle.” I asked where we were going but Wyatt shook his head. This was as much as he knew.

After conferring with my team, I donned my shoes and went in search of something that would suffice as water bottles for Maureen and me. Looking back now, my preparation for the camp had been woeful. I had come to the camp without any equipment whatsoever. I’d only managed to buy my running shoes in the week preceding the camp. I’d bought a hopelessly inadequate cap in a supermarket, borrowed sleeping bags and a tent from Mr Ho Chi and prised a quarter mattress from Deshi Tony. But neither Maureen nor I had a water bottle. And it seemed that no one else on the gashuku had any spares... 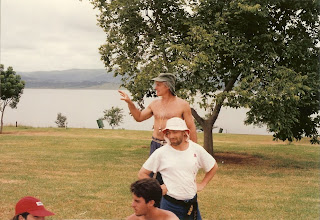 While looking through some bins hoping to find an old coke bottle, young Damien (a fellow I’d enjoyed training with in my old home dojo and with whom I’d shared a previous gashuku experience) ran up and suggested I ask for help from some campers who had just parked their caravan 500 metres up the shoreline of the dam. I took his suggestion and thankfully they were able to provide me with 2 (used) plastic 250 ml juice containers. I filled these with water from the tap at the ablutions block and raced down to the kitchen tent for the roll call.

We set off along the familiar gravel track for what was clearly another run, only this time we didn’t turn around at the familiar 4, 5, 7 or 8 km marks. We kept going. Eventually the 4-wheel drive track disintegrated into an indistinct nature trail meandering through the thorny African scrub. Every now and again Bob would ask my fellow Australian student, Greg Seymour, to scout what was ahead. Greg was supremely fit for running and seemed to do so with great ease, sprinting off into the distance and returning 10 or 15 minutes later with news. But as the day wore on I became increasingly concerned that he was using up too much energy. And I also knew that unlike me, Greg had not managed to find a water bottle to bring on the run... 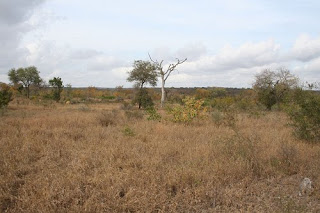 Eventually we reached a point I conservatively estimated to be 11 km from the campsite – and turned around. The front pack, including Greg, bolted off and the rest of us continued to shuffle, spreading out into an ever thinning line under the hot African sun.

All I could think of was to keep putting one foot in front of the other. Despite careful rationing of our water, both Tim and I had exhausted our meagre 250 ml supplies. Since I knew that we were, at worst, about 6 km from the campsite I was confident that we would get back safely.

Maureen had not kept up with the group and had turned back at an early stage, so I was reasonably sure that she was already back at the camp. Looking over my shoulder I could occasionally see my brother Nenad about 500 metres behind me. He was running with Rod (a heavily built fellow who is still the only person who has ever beaten me in sanchin pushing!). I knew that Nenad could take care of himself. Moreover Rod had cleverly brought with him a purpose-built backpack filled with about 3 litres of water. If worst came to worst, we could stop and wait for Rod who would surely have some reserve to permit a sip or 2.

The dangers of dehydration were however about to become apparent: Just as Tim and I came over the crest of a hill we found Greg staggering off the track, heading for a swamp that was part of the Midmar Dam catchment. 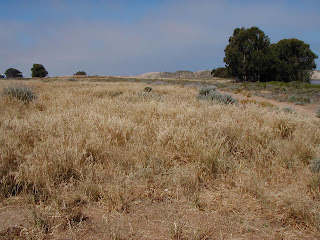 Tim and I guided Greg back to the track and set him down under the cover of a small thorn bush. As he lay down he kept repeating: “I’m okay really. Just being terribly lazy. I can’t think what’s come over me.”

“Listen carefully Greg,” I said, “Nenad and Rod are just behind that crest. Rod has water with him. Don’t go anywhere. Do you understand? Stay here until they arrive.”

Greg nodded. “Yes indeed. I’ll just stay here and have a little rest. Although I am being rather lazy. Perhaps a slight rest will do me good.”

Not wanting to delay our own return to the camp, Tim and I continued our shuffle, confident that Greg would be taken care of by Rod and Nenad.

We did indeed make it back to camp safely, albeit suffering from heatstroke and rather severe dehydration. I drank enough water to make my stomach swing, then lay down under the shade of the training tent, my head pounding and my ears ringing. 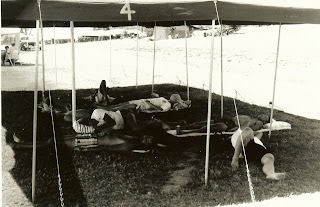 It was only much later that I discovered what had become of Greg. It seems that Nenad and Rod found him wandering back from the swamp off the side of the track, his face covered in mud. “It’s okay really,” Greg told them. “All you have to do is stick you head in and drink.” Nenad told me he could see Greg’s footprints leading into the marsh and an imprint in the black mud where Greg had thrust his face. The water in this area was untreated and in the following days Greg became very ill with vomiting and diarrhoea. Thankfully he didn’t also contract the bilharzia parasite which is endemic to water in that part of Zululand...

Greg and many others were in fact soon picked up by Deshi Tony who, having returned to the campsite early, drove back in a "bakkie" or ute (tray back) laden with bottles of water. Tim and I had beaten Tony's car back to camp by a matter of minutes. As I lay spreadeagled under the shade of the canvas I wondered grimly if the “achievement” had been worth it.

Next: Decadal Gashuku Part 4: The Aftermath