December 31, 2012
It was late December 1989 (almost exactly 23 years ago) and I was in Belgrade. The dark clouds of future wars were gathering inexorably. Ugly nationalism, racism, tribalism – call it what you will – was rearing its ugly head, foisting the increasingly (and perplexingly – for me anyway) popular Slobodan Milosevic on its shoulders. 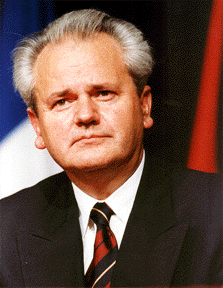 "There," my late, much loved, uncle said, pointing across the river Sava, "is where we came together as a nation – thousands of us – to declare a new era." I had heard that Milosevic had addressed a rally there some months before, stirring up nationalist fervour and racial/tribal paranoia to a level that hadn't been seen in Serbia more than a generation. My uncle then pointed to a huge placard of their new leader on a nearby wall. "Yes - he's our man. He's the one who is going to save us."
"But uncle, isn't he just part of the existing communist establishment? You have a chance to get rid of that whole terrible regime. For the first time since the war, you have a real chance of achieving that!" (My family were active anti-communists, particularly during and immediately after the war.)
"Ah, dear nephew," he sighed. "It's complicated... You don't understand – I'll have to explain it to you sometime."

Indeed, everywhere I went, I heard the same sentiment. Endless "discussions" and "debates" dominated television, parliament, city squares and private lounge rooms. Everyone had an opinion, everyone had a "solution". But very few seemed to think that removing Milosevic had anything to do with that solution. Despite the fact that they were inundated with Western media in the form of round-the-clock CNN and other news broadcasts, there was an inexplicable lethargy when it came to letting go of the past – and a thousand and one excuses, justifications and "explanations" were offered (or at least promised) to we foreigners.

It was this "lethargy of confusion" that enabled Milosevic to drag Serbia through its darkest hours – darker, my late grandmother said, than communism and any of the wars through which she lived (including the Balkan Wars of 1912-13, the First World War and the Second World War); so dark that they eventually hastened her demise in the bitterly cold, bomb-ravaged ruins of Belgrade after the NATO bombing. 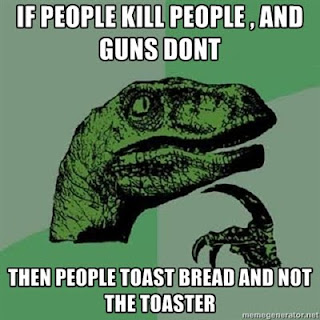 It's sad when I see a similar "lethargy of confusion" in the US debates concerning "gun control". The rest of the world is left "shaking its collective head" while everyone in the US seems to have a "different opinion": there are "discussions" and "debates"; there is talk of "left" and "right" of "liberal" and "conservative".

Everything is analysed and re-analysed, the same arguments about guns and toasters, often memed by T-Rex cartoons, are trotted out. And if you're not from the US you get told: "It's complicated... You don't understand – I'll have to explain it to you sometime."

Yet the rest of the world, looking from the outside in, can tell that it doesn't need to be that way: the main "culprit" (although by no means the only one) is easily identified – and can fairly easily be "fixed" (or at least greatly improved). Except that powerful vested interest in that country (notably the gun lobby and in particular the NRA) conspires to muddy the waters with a continual stream of propaganda and other disinformation. Why? Because they represent gun manufacturers, not gun owners. And restrictions of any kind on private gun ownership would affect the profit margins of their industry. And their industry presently enjoys a "protected" status – one that concerns tools which are, by their nature, very dangerous (note, I am not suggesting "blameworthy") yet one that is far less regulated than the automobile, aircraft, agricultural, pharmaceutical building or any other industry.

So the NRA and other lobby groups keep peddling the same disinformation. As in the old Yugoslavia, they protect their vested interests and obfuscate the facts of gun control with the politics of division: If you're in favour of it you're a "socialist, leftist, anti-patriot who wants government to take over your whole life".
"Well it's not taking control of mine. Nor is it taking my guns. Out of my cold, dead hands..." 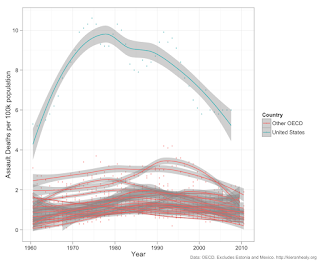 In two recent articles ("We need to talk about the whole gun thing" and "5 false assumptions in the gun control debate") I have covered the nature of this disinformation and the facts of gun control. I invite you to read them, particularly if you are ideologically "opposed" to the latter. Why?

I think you need to stop relying on a "slippery slope of nonsense" to block what is a long-overdue regulation of something that is at least as (if not more than) deserving of appropriate regulation as driving a car, flying a plane, making pharmaceuticals, building a home or running heavy factory equipment. Dangerous things mightn't kill people. But we shouldn't be allowing everyone equal, unregulated access to them either. We need to control that access so that only those who are sufficiently fit and proper end up with the right to own those things. This means more "hoops" to jump through for applicants and longer wait times. It also might mean a restrictions on a few select gun types that are known to be particularly amenable to mass shooting. It won't and can't mean "banning all guns".

And, as I discuss, the overwhelming preponderance of data shows that if you decrease the number of legal guns in the community by this method, two consequences follow:

* the number of illegal guns will also decrease; and
* the rates of violent crime will go down.

Indeed, if you compare the above graph with the one below, you will note both a downward trend for both private gun ownership as well as gun-related crime - and this is in the US. Correlations like this might not be proof of a "causal" relation, but they are consistent with our world experience of responsible gun control in developed nations. They are inconsistent with the "arm society to the teeth" proposals offered up by the gun lobby as solutions to mass shootings and other violent crime. 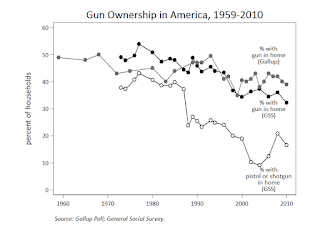 Whatever happens, you need to stop the "lethargy of confusion". Crime control might be complicated - but gun control isn't. I don't need you to "explain it" to me. It does not depend entirely upon "unique American cultural factors".

Nor is anyone likely, or even trying, to "ban all your guns", "import an entire set of foreign values into the US" or "remove your rights under the Second Amendment".

Some facts that are just inescapable – however much powerful, influential groups with vested interests wish you to ignore them.

In Belgrade the fact was that Milosevic had to go.

In the US the fact is that you need more responsible laws to regulate guns.

As with the Serbs in the late 80s early 90s, your own endless debates, philosophising and sophistry won't help you one iota (as they haven't so far) in achieving a better future. Only action will.