It's hard to believe we are rapidly approaching the 20th anniversary of the Decadal Gashuku, a martial arts training camp held by Lao Shi Bob Davies at Midmar Dam in Kwazulu Natal from 3 to 13 January 1990. It was an international event comprising 2 separate 5 day courses. Some of us (the "decadal participants") were there for both.

For those unfamiliar with the gashuku (training camp) concept, it typically features 8 hours of training/instruction per day. The decadal participants were in for a treat; we would have 10 hours instead. It was the theme - 10 lots of everything.

To better fill you in on the picture I should rewind a little.

My wife Maureen and I were newlyweds and I had freshly graduated from law. We wanted to go overseas for an adventure but we didn't have 2 pennies to scratch together. I had a job lined up, but wouldn't start till February. So we decided to take out a loan. Given my degree and my upcoming job, the banks fell over each other to get to us.

Flush with borrowed cash, we headed off to Europe where I introduced Maureen to my relatives and she introduced me to hers. All good so far. But there was more to come. I somehow convinced Maureen to spend the second half of our honeymoon in Africa. After all, Bob was holding a special camp. I had visions of thatch huts nestled in thorn trees overlooking the African savannah; some relaxing taiji in the crisp morning air, elephants strolling by, zebras grazing in the distance. I should have known better. The only elephants and zebras I'd seen in all my years in Africa were in enclosures. And my training with Bob should have taught me that the camp would be anything but relaxing.

In "Running with Bob" I described our arrival in Durban just under a week before new year. We stayed a few days with Bob until his deshi (apprentice) Wyatt found us accommodation in student digs rented by friends of his. There I was able to rest my blistered feet for a couple of days.

Then, in the afternoon of new year's day, we set off to Midmar Dam in a small convoy; Bob and his family in their car towing a caravan, the deshis in another, and Maureen and I with one of Bob's students. The remainder of the students would be arriving a day later; we were going early to set up.

Our driver was a pleasant chap who told us that before training with Bob he had been a student of something called "Ho Chi".
"Ja, no - looking beck, ah don't think it was a rrreal mahshall aht," he opined in a Johannesburg drawl. "Hoe Chee was probablee just made up."

I was expecting the trip to take a couple of hours at most. For whatever reason it seemed to take much longer. It was well after lunch and we hadn't eaten, so Mr Ho Chi pulled into a dingy third-world cafe on the outskirts of Pietermartizburg. Of all the unappetising choices, I ordered the least risky: chips (French fries to you Americans). But even these turned out to be half cooked, soggy and dripping with oil.

Seated there at the chipped lino tables, I caught some movement out of the corner of my eye and casually glanced over to the wall where some Zulu children were laughing conspiratorially. Peering over my shoulder I saw another kid who had walked diagonally opposite to a rough concrete trough and was washing his hands, grinning at his mates. Then I looked down at the table I saw their target: my wallet with our remaining borrowed cash. I stowed it safely in my pocket then beckoned for the kids to come over and take the chips. They swooped onto the consolation prize like seagulls and we left.

It was pitch dark when we arrived at a deserted camp. Only the distant light of toilet blocks gave hint of any civilisation. We drove down to the water's edge and worked under the headlights, setting up our tents. The night air had suddenly become quite frosty. 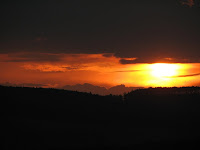 Our "2 person" tent had been kindly lent to us by Mr Ho Chi, with some sleeping bags sourced by the deshis. I remember prodding the uncompromisingly rocky ground with my shoe, wondering how we would sleep. I coerced a resentful Deshi Tony into parting with a quarter piece of mattress ("Ag man, I was going to use that for a pillow!" he exclaimed). I was a little nervous as this had clearly made the stressed deshi dislike me even more (somehow we had started on the wrong foot). At the same time I had a gut feeling that the little piece of mattress was going to provide our only comfort in the coming days.

By the time we finished setting up it was near midnight and we still hadn't eaten. I jumped into a car with Tony and we headed off into the ink-well darkness to find some food. Almost an hour later we finally returned from a little all-night diner, bearing curry burgers (when I asked for a burger without curry the man behind the counter stared at me blankly). I still remember sitting on the hard ground in the dark, adjusting myself so that a rock wouldn't go up my butt, unwrapping my burger and saying "happy new year" to Maureen. At least I didn't say "happy honeymoon". Oh well, it would get better, right?

The next morning I emerged from my tent to the alien world that had been hidden by the night: a harsh, brown savanna surrounding a flat dam. There was little else. A few struggling, pathetic saplings had been planted near the water's edge, and one or 2 lonely thorn trees could be seen elsewhere in the camping area; otherwise there was really no shade for as far as the eye could see.

The other participants dribbled in as the morning wore on. We helped them set up their tents, then moved to the kitchen tent. Last but not least we erected a "training tent" - an area we were to use at the hottest part of the day but which quickly proved woefully inadequate for its task; it was too small for the 30 odd participants and it also acted as a heat trap.

That night I lay awake on the rocky ground, thinking about the training with a growing sense of trepidation. I also couldn't sleep because of the dreadful sunburn on my calves - the only part of my body I hadn't covered in sunscreen. It seemed like an omen; whatever preparation I'd had was completely inadequate for the task.

Looking back now I can see that my gut feeling was spot-on. Yet I also know I wouldn't feel as concerned if I were in that position today. Perhaps that is part and parcel of having overcome challenges in the past. You learn that pain exists only in the moment. After it has gone you don't remember it. You remember being in pain - but you don't remember the pain itself. That is part of human instinct I suppose. If we could conjure up the feeling of pain just as we can the memory of a song, smell or taste then we'd all be wrecks.

None of this would have comforted me back then. I hadn't learned enough about the nature of pain. The lessons were about to begin.