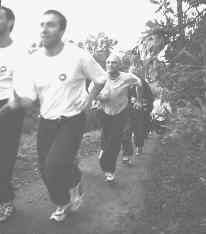 In 1991 I had a visit from one of my former karate classmates in South Africa, Peter Banks. Peter started training shortly after I did, but where I was a fresh-faced teenager, Peter was already in his late 30s. And where I was pencil thin, Peter was not. To be blunt, he had a sizable middle-aged spread.

Imagine my surprise when, almost a decade later, Peter turned up at our dojo looking like an iron man. The paunch was no more. In its place was the proverbial "six pack". It was something I never imagined possible with Peter. "How did you do it?" I asked.
He replied: "Running with Bob".

He was, of course, referring to our teacher Lao shi Bob Davies. I immediately understood how Peter had achieved his remarkable transformation. If you could keep up with our teacher you couldn't have a paunch. The 2 concepts were mutually exclusive.

I cast my mind back to my visit to Lao shi Bob the year before. My wife and I had arrived at his house in Durban in the dead of night after an exhausting flight from Europe. We were on our "honeymoon". It was late December and we were reeling from the shock of the humid heat - especially since we had just experienced temperatures dropping as low as minus 20 degrees Celsius.

We had come to Durban to attend a special gashuku (training camp) - one that is now known as the infamous "decadal" gashuku (ie. once in a decade). One of my students, Tim Hull, had flown over directly from Australia and was also staying with Bob. 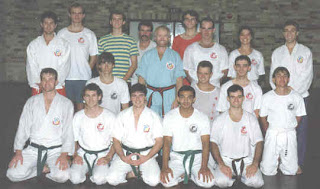 I still remember how, unable to sleep in the tropical heat, I lay awake at 2 a.m. listening to Bob potter around the house, knowing that in 3 hours time I would be out pounding the bitumen, followed by a couple of hours of training.

Somehow I managed to nod off, only to wake at 4:55 a.m. to the rude buzzing of the bedside clock. I tried to rouse my sleeping wife (who in those days trained alongside me) but soon gave up, guessing correctly that Bob would not be troubled by her absence (where he would not have tolerated mine). So I pulled on my straight-out-of-the-box running shoes (that were about to give me dreadful blisters) and headed out into the steamy half-light where a baggy-eyed Tim was waiting next to my cheery sensei and his resigned deshis (apprentices), Tony and Wyatt.

I'd not really done any training in the preceding weeks. Being in Europe with my relatives meant that I'd been spoiled with food, slivovitz and more food. With the temperatures plummeting we were forced to stay indoors in crowded, smoky rooms, chatting, eating and drinking. What little training I'd done had been strength-based. I'd noted that in previous visits, my teacher had "bulked up", so in order to keep up with him I'd gained about 10 kg in muscle, doing exercises like squats - 4 sets of 150 kg for 30 reps (or if we had no weights, single leg squats - see the picture below). Little did I know that the game had changed; Bob was now into aerobic training. And in this respect I was as unfit as a police sergeant.

Looking at my teacher and his apprentices in the gray pre-dawn light, I noted their uniform 6 pack abdominal muscles, then scanned down to my own spare tyre. Tim was chatting to them amiably, blissfully unaware of what was to come. 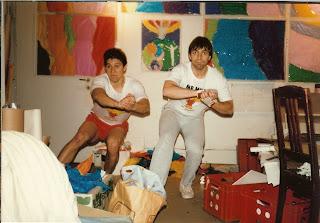 We set off for a "joggle" to warm up. This is Bob's description of the half-shuffle, half-run that he always does for the first 15 minutes or so. This enabled us to get round the corner from his house to where a large group of runners had assembled in the breaking dawn, most of them running on the spot and otherwise limbering up. A man with a megaphone addressed the crowd:
"Okay people - just an easy 16 km today. We don't want to overdo it. After all, we're starting Comrades preparation next week."
The Comrades Ultra Marathon is an annual 90 km race from Durban to Pietermartizburg (an inland city that is the capital of Kwazulu-Natal). We were going for a run with professional and semi-professional long-distance runners. I took a look at Tim's wan expression.
"Cheer up," I told him. "It's just an easy 16 k's."

Half an hour later Tim and I were puffing and panting, plodding south along Kensington Drive. Bob, his deshis and the Comrades runners had long since left us in their wake, having set a pace I could barely sustain over 400 meters.

Since the Kensington Drive is very straight, we could make out the runners in the distance, ascending a rise. At the very front were Bob and his 2 deshis, apparently chatting comfortably as they ran. I reflected how typical this was; Bob was beating the runners at their own game and was doing it in style.

When we finally arrived back at Bob's house the deshis were waiting for us to start training. We were required to jump into Bob's swimming pool and do 1000 mae geri (front kicks) in the shallow end. Compared to the running this was a piece of cake. I was in my element (albeit a wetter one than that to which I was accustomed).

The decadal gashuku which followed soon afterwards involved running every morning (and once, in the afternoon for a half-marathon!). By the end of the 13 days on that camp we'd run over 150 km. More than a couple of people commented that my spare tyre had disappeared.

While I had adapted to the conditions, I wasn't exactly running with ease. For one thing my body was aching from strain and injury. For another, fitness is not easily acquired in under a month. What I did learn to appreciate is the nature of our limitations and how we can overcome these.

Prior to that time I'd never imagined it possible that I could achieve what I did during that visit to Bob. Quite frankly, I'd have thought the sustained running (without any prior training) was impossible. I was proved wrong.

Bob often spoke about the nature limitations and how we need to avoid putting up our own; there are more than enough out there already. What I learned on this occasion was that my perceptions about my capabilities were way off. I had underestimated myself and as a result I'd been putting up my own barriers; barriers that were in addition to the normal obstacles one encounters in life.