April 06, 2017
In the arts, writing - particularly fiction - seems to stand alone as something for which (apparently) no particular training is required. As far as the many members of the public seem to believe, it's something you can either do, or can't do. After all, most of us can "write" stuff - can't we? We all write emails, reports, notes, CVs, requests and applications...

Well I hate to break it to you: that isn't the same as writing - at least not professionally. Like any art, writing (both fiction and non-fiction) is a skill acquired over many years of dedicated study and practise. Why should it be otherwise? Writers need to learn their craft, otherwise they remain nothing but beginners. 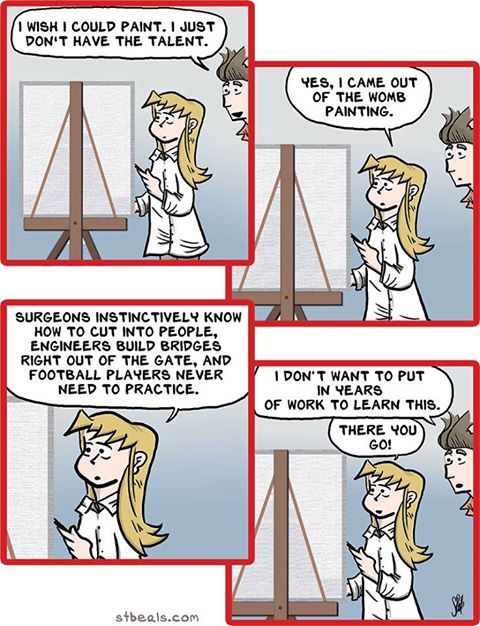 In other words, writing well does not arise solely from some "innate talent", triggered by the mere fact that you have read some (or many) novels. Nor does it matter that you have been known to pen the odd humorous missive or even short story (perhaps one that has languished in the bottom drawer of your desk since shortly after you wrote it).

I'm sorry to be the bearer of bad news on the latter score. You might well have an "innate talent" for the profession, but until you learn its basics, you have nothing.

And you might have to confront the fact that you don't even have the talent you imagine: you'll only know one way or the other once you've invested some significant effort and time into the process of writing.

But most people I know who dream of writing books don't actually make such an investment. If they make any at all, it often comprises little more than languishing (sometimes for decades) over a particular "magnum opus" - one that hasn't progressed beyond a few dozen pages.

Rather sadly, many never work out what it really means to be a writer: they never experience the long solitary hours, the mental anguish no one else can see, the struggle that ensues on almost every page, day after day (or night after night, long after all others have gone to bed). Nor do they relate to what drives the writer to keep going in these circumstances. In other words, they never discover what the process of writing truly involves - and whether or not this process is something they would/could ever enjoy.

These would-be writers dream of seeing their name on bookshelves like their favourite authors - but skip the part about the actual writing. It's a bit like dreaming of being a rock star - yet not confronting the reality that you haven't the charisma, stamina, skill or even inclination to do gig after gig - night  after night. Or it's a bit like wishing you were a famous Hollywood actor - while forgetting that you cringe at the thought of public speaking, never mind other types of performance, and can't abide memorising hundreds of pages of lines.

Worse still are those who do really do want to be writers - but arrogantly refuse to acknowledge that the craft requires some learning. So they slog through to a full novel (or two, three or more) - using a writing technique makes reading the backs of aerosol cans exciting.

Don't be one of those "would-be" writers. Learn your craft.

Learn it because too much of the writing we see today has cardboard-thin characters and dialogue that makes us cringe.

Learn it because many contemporary books break (often in every single sentence) the simple rule: "show, don't tell".

On the latter issue, if you have to tell your readers that it was "an awfully cold night", that your protagonist was "terribly frightened", or that the sky was "stunningly beautiful" you have no business doing anything but going back to the basics. If you think adverbs like "happily", "sulkily", "angrily" or "flippantly" (as an adjunct to dialogue or otherwise) illustrate anything other than your inability to show your characters' emotions (because you're not showing those emotions, you're simply telling your reader about them) you don't understand the difference between a précis and prose.

If you want an analogy, "telling" is what Donald Trump might do in assuring you that his speech was "amazing". "Showing" is when a statesman gives a speech and you decide (based on your impressions of the speech) that it was "amazing". Similarly, your reader should be able to decide whether the night was "cold", someone was "frightened" or the sky was "beautiful" from the way your prose sets the scene (eg. a description of trembling blue lips, or breathed-out fog, might suffice to convey the sense of an "awfully cold night"). Ditto with any adverbs relating to speech. Basically, you should be leaving it to your reader to decide whether something was done or said "happily", "sulkily" etc. from how you describe the situation. Telling your reader what you want them to feel won't make them feel it. Only good writing will.

Of course, "show, don't tell" is just one basic rule. You need to know them all.

You also need to know how to edit - and be prepared to do it: if can happily repeat annoying attributions like "chuckled" eight times in a page, you have a serious case of cognitive dissonance.

Please be advised: I don't care if you actually manage to get published with work that exhibits ignorance of the basics of writing and editing. Published garbage is still garbage. If your dialogue resembles Luke Skywalker whining in technobabble, or your "mature, serious relationships" reek of awkward adolescent fantasy, all the sales in the world won't change the fact that you don't know what you're doing.

Most of all, you shouldn't derive comfort from the fact that your/you're target readers confuse their/they're/there spelling and grammar. The rise of functional illiteracy in the modern world is certainly no defence for sloppiness. As a writer, you should be feeding your readers' minds the literary equivalent of Michelin star meals, not plying them with Big Macs and fries.

Lastly, if your editor essentially rewrites your books every time (in order to fix your writing mistakes and match your nascent text to some niche, pulp, airport-bookstore market), you're not much better off than any of the above.

So learn your craft. Learn it because "that book inside you" is probably an idea that if written down without the appropriate level of skill is no better than: 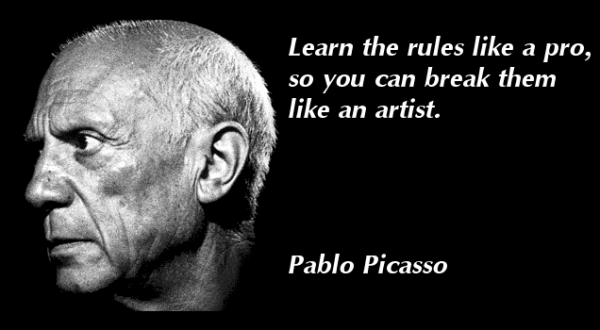 Please don't think that a couple of short (untutored) pieces of fiction totalling a few thousand words will miraculously transform you from a beginner to a writer. There is no substitute for both training and experience/practise. Don't imagine that, because you've finally completed that "magnum opus" (sans any form of training in creative writing), you've finally made it. You might just have wasted an enormous amount of time on hundreds of poorly-crafted pages, many of them less interesting than the previously-mentioned aerosol can instruction

And if, by some twist of fate, you end up having badly-written (or, for that matter, well-written) books published, don't be flattered into the delusion that you no longer need to learn and improve.

Just because we can all type or hand write doesn't mean we can write. And it sure as heck doesn't mean you can do it with nothing more than your "innate talent".

Take a university course in creative writing or attend a community workshop. Read some books on the subject. Failing all this, re-read your favourite novels (and no, Fifty Shades of Grey and Star Wars novelisations won't cut it). Find out what made those novels work for you. Write again. Have your work ripped apart again. Keep doing that until you actually know something about your craft.

Of course you won't get results overnight. But maybe one day you will anticipate exactly what your mentors/readers will say about your latest work. And maybe one day, you'll be able to turn around and say: "I understand what you're saying and I know exactly why. But in this case, I'm deliberately doing it this way, for this reason."

In other words, learn the rules before you choose to break them. Don't be one of those writers who doesn't even know what the rules are. Because then you won't be a writer: you'll be a "merchandiser" at best and a would-be writer at worst.

Learn your craft - and be an artist. Be a real writer.